The tripartite Mechanism coordinated by the UN Mission in Colombia, with the Government and the Revolutionary Armed Forces of Colombia-People's Army (FARC-EP), will begin to monitor and verify the ceasefire and cessation of hostilities tomorrow, Monday, 7 November.

The tripartite Mechanism coordinated by the UN Mission in Colombia, with Colombia's Government and the Revolutionary Armed Forces of Colombia-People's Army (FARC-EP), will begin to monitor and verify the ceasefire and cessation of hostilities tomorrow, Monday, 7 November.

The joint Monitoring and Verification Mechanism will gradually begin its work based in eight regional offices, as the separation of forces will take place in temporary locations throughout the country.

“I wish to highlight that I witness the commitment from the parties every day; this gives us confidence, tranquility and the certainty that this peace process will come to fruition,” said General Perez Aquino, head of the UN Mission's international observers, during the first press conference held with the joint Mechanism representatives this past Friday in Bogota.

Barely one month ago, Colombian voters narrowly rejected the historic peace accord between the Government and the FARC-EP meant to end the Western Hemisphere's longest running conflict. The deal was the culmination of four years of talks hosted in Havana, Cuba, between the two sides, and which led to agreements on key issues such as political participation, land rights, illicit drugs and victims' rights and transitional justice.

Both the Government and the FARC-EP reiterated their commitment to maintain the ceasefire.

Admiral Orlando Romero, Government of Colombia representative in the Mechanism, explained that all parts are “clear about the commitments to the rules governing the ceasefire and to the population's rights, under the ceasefire's framework.”

Further, Marco León Calarcá, FARC-EP representative in the Mechanism, said “it is time to reiterate the commitment of the FARC-EP to the bilateral ceasefire and cessation of hostilities as a foundation for the stable peace that we need to achieve.” He also explained that more than 300 of his men and women were trained as members of the tripartite Mechanism.

To enable the ceasefire monitoring and verification the guerrillas are moving to temporary locations, also to ensure the safety of the civilian population and of FARC-EP and Public Force members. During the press conference the parties stressed that any citizen can file complaints or concerns directly to the joint Monitoring and Verification Mechanism, according to the UN Mission.

General Pérez Aquino hailed the UN Security Council´s – and the international community's – support to the peace process and stressed the importance of reaching a final peace agreement in the near future. He also clarified that the UN Mission has no deadline to stay in the country and will continue to work in Colombia as long as there is a request from the parties.

Finally, Government of Colombia and FARC-EP officials thanked the support from the International Committee of the Red Cross to the process. 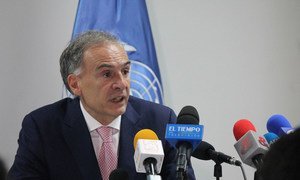 The United Nations Security Council has sent a letter to Secretary General Ban Ki-moon authorizing the UN Mission in Colombia to verify the ceasefire and cessation of hostilities, following a request from the Government and the Revolutionary Armed Forces of Colombia – People’s Army (FARC-EP).