UNHCR/Ivor Prickett
A family displaced by fighting in the village of Shora, 25 kilometres south of Mosul, Iraq, walk towards an army checkpoint on the outskirts of Qayyarah.
4 November 2016

The Office of the United Nations High Commissioner for Human Rights (OHCHR) today warned that the Islamic State of Iraq and the Levant (ISIL/Da’esh) fighters have taken some 1,600 civilians to Mosul city in an attempt to shield themselves from airstrikes, and that nearly 400 women from Kurdish, Yezidi or Shi’a Muslim communities in Tal Afar are now being held captive.

Further reports stated that 180 people were killed on Wednesday in the town of Kokja in eastern Mosul and potentially an additional 200 in Mosul. OHCHR is working to verify the details.

ISIL has taken “trucks full of abducted civilians” from Hamam al-Alil to Tal Afar city. Some of the families were told that they would be going to Syria.

On Wednesday, 150 families were moved from Hamam al-Alil to Mosul. ISIL used loudspeakers to order residents of the villages of Lazagha and Arij (5 kilometres from the centre of Hamam al-Alil) to either leave their homes or be severely punished.

Since 17 October, ISIL militants have been forcibly recruiting children as young as nine and 10 to fight in Mosul.

Meanwhile, the OHCHR continues to receive reports of mass killings, including a report on Monday that ISIL killed 50 of its own militants in the Ghazlani military base in Mosul for alleged desertion.

The UN human rights wing raised concerns about air strikes against civilians, which reportedly killed four women and 17 other civilians in the al-Qudus neighbourhood in eastern Mosul on Wednesday evening.

“We remind the Government and its allies that all military operations, as well as security screening of people, must be carried out in full compliance with international humanitarian law, and that they must strictly abide by the principles of humanity, distinction, proportionality, necessity and precautions to minimize loss of civilian life,” said OHCHR spokesperson Ravina Shamdasani.

Meanwhile, the International Organization for Migration (IOM) Iraq Displacement Tracking Matrix (DTM) today recorded a total of 22,224 individuals displaced by fighting in the Mosul region that began on October 17.

The largest number of these internally displaced people (IDPs) is in Ninewa governorate, where 3,577 families, or 21,462 individuals. have been recorded, (about 97 percent of the total displaced by the current Mosul emergency). Others have been displaced to Anbar and Erbil governorates.

According to the agency, since the beginning of the Mosul operations, the cumulative number of IDPs reached 4,182 families, corresponding to 25,092 individuals (from 17/10–3/11). The 22,224 individuals reported today (04/11) are those still in displacement. An estimated 3,300 recent IDPs returned to their communities between 18 October and 3 November.

On Wednesday, IOM Iraq released its Mosul Crisis Response Revised Funding Gap report, which outlines the revised needs and estimated funding gaps for shelter support, including establishment of emergency sites; provision of non-food relief items; emergency health services; delivery of psychosocial services; emergency livelihoods and social cohesion activities.“IOM has had to redirect the funding for its humanitarian response to the establishment of emergency sites,” explained IOM Iraq Chief Mission Thomas Lothar Weiss. “Redirecting funds, coupled with the increased needs in some sectors, means widening the funding gaps for the provision of humanitarian life-saving assistance to the affected population.” 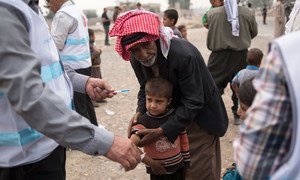 Some 20,700 people have been displaced since the operation to liberate the Iraqi city of Mosul from terrorists started on 17 October, the United Nations Children’s Fund (UNICEF) said today, estimating that 9,700 of them are children in urgent need of assistance.