UNICEF/Lindsay Mackenzie
The sunset at Debaga Camp is obscured by clouds of smoke from oil fires lit by retreating armed groups in Qayarrah, Iraq.
27 October 2016

Some civilians are experiencing near-suffocation and respiratory illnesses due to what UNEP calls the Islamic State of Iraq and the Levant (ISIL/Da’esh) “scorched earth policy” as they retreat from the Iraqi city.

Armed groups set 19 oil wells on fire near Al Qayyarah, a town just southeast of Mosul. As a result, citizens and armed forces have been exposed to toxic fumes. The burning crude oil is releasing a wide range of pollutants, including soot and gases that cause skin irritation and shortness of breath.

Together with the UN Office for the Coordination of Humanitarian Affairs (OCHA), UNEP connected responders and hazardous materials experts, who provided technical assistance in dealing with the fire.

On 23 October, a chlorine gas leak originated from a water plant affected by the fighting, for which some 100 civilians sought medical treatment.

And, last week, a toxic cloud plume spread for dozens of kilometres after stockpiles of sulphur dioxide stored at the Mishraq Sulphate Factory caught fire. The Directorate of Health, with the support of the World Health Organization (WHO), treated more than 1,000 cases of suffocation in Qayyarah, Ijhala, and Makhmour.

A young internally displaced Iraqi girl stands on a dusty path at the edge of Debaga camp, near Mosul in northern Iraq. Smoke from oil fires can be seen in the background. Photo: UNHCR/Ivor Prickett

“This is sadly just the latest episode in what has been the wholesale destruction of Iraq’s environment over several decades – from draining of the marshlands to the contamination of land and the collapse of environmental management systems,” said UN Environment chief Erik Solheim in a press release.UNEP is working closely with partners in Iraq such as OCHA, WHO, the UN Institute for Training and Research (UNITAR) and the UN Operational Satellite Applications Programme (UNOSAT) to respond to the urgency of environmental damage from armed conflict. UNOSAT has provided support in mapping smoke plumes during the offensive, which can help minimize harmful impacts of chemical hazards during the humanitarian response.

But Mr. Solheim warned that “this ongoing ecocide is a recipe for a prolonged disaster. It makes living conditions dangerous and miserable, if not impossible. It will push countless people to join the unprecedented global refugee population. That’s why the environment needs to be placed at the centre of crisis response, conflict prevention, and conflict resolution.”

Additional resolutions holding Member States accountable are the text that declared International Day for Preventing the Exploitation of the Environment in War and Armed Conflict (6 November) and the recent resolution adopted by the Environment Assembly, ‘Protection of the environment in areas affected by armed conflict’, which emphasizes UNEP’s role in supporting Member States throughout these challenges.

UNEP will continue to address the environmental health impacts that are part of humanitarian action and crisis responses during the 2017 Environment and Emergencies Forum to take place in Nairobi next June. 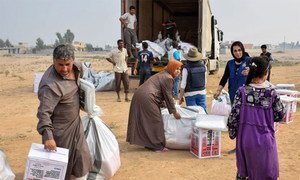 As newly-displaced Iraqis are starting to arrive at camps set up by the United Nations for people fleeing the ongoing military offensive to wrest Mosul from terrorists, the Organization’s health and refugee agencies have ramped up their own operations to provide assistance and to respond to what has thus far been a ‘moderate’ influx.