The United Nations World Health Organization (WHO) in partnership with the Coalition for Climate and Clean Air (CCAC) and the Government of Norway has launched a global awareness campaign on the dangers of air pollution – especially ‘invisible killers’ such as black carbon, ground-level ozone and methane – for the health of individuals and the planet.

Titled BreatheLife: Clean air. A healthy future, the campaign aims to mobilize cities and their inhabitants on issues of health and protecting the planet from the effects of air pollution. Moreover, By WHO and CCAC joining forces, ‘BreatheLife’ brings together expertise and partners that can tackle both the climate and health impacts of air pollution.

Urban air pollution levels also tend to be higher in many low and middle-income cities and in poor neighbourhoods of high-income cities. This means reductions in pollutants can have particularly large health benefits for lower income groups as well as for children, elderly, and women, the agency explains.

The campaign seeks to cut in half the number of deaths from air pollution by 2030 – the target year for the achievement of the UN Sustainable Development Goals (SDGs), adopted by the UN General Assembly in September 2015.

'Breathe Life' highlights the practical policies that cities can implement to improve the air quality through better housing, transport infrastructure, managements of waste and energy systems. It also educates individuals and communities about the measures they can take daily to achieve cleaner air, such as stopping the incineration of waste, development of green spaces and the choice of walking or cycling.

Nine in ten people breathe air that is not safe. Air pollution is an invisible killer that we may face on a simple walk home or even in our homes.

Improved vehicle standards, prioritization of clean public transport, and the adoption of stoves and more efficient alternative fuel for cooking, lighting and heating are also part of the actions put forward by the campaign the goal of saving more lives and protect the environment.

For WHO and its partners, this series of measures to achieve a reduction of pollutants could significantly reduce the number of annual deaths from air pollution.

♦ Receive daily updates directly in your inbox - Subscribe here to a topic.
♦ Download the UN News app for your iOS or Android devices.
pollution|habitat 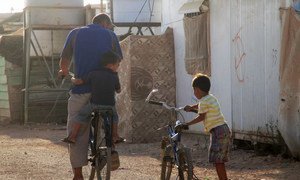 Lack of investment in safe walking and cycling infrastructure not only contributes to the deaths of millions of people in traffic accidents on unsafe roads and poorly designed roadways, but also overlooks a great opportunity to boost the fight against climate change, a new UN environment report said today.