WHO Yemen
As part of his treatment for mental health, a displaced boy sculpts a replica of his house which was damaged in Sa'ada, Yemen.
10 October 2016

Marking World Mental Health Day 2016, the United Nations has highlighted the importance of making mental healthcare available to everyone who needs it – with a focus this year on providing immediate support to those in psychological distress after a crisis.

According to Secretary-General Ban Ki-moon, psychological distress takes many forms.

“Today, we are witnessing an unprecedented wave of humanitarian emergencies linked to conflict and natural disasters,” Mr. Ban said in his message on the Day.

It is perfectly possible to train first responders… to provide ‘psychological first aid’ to people in need.

The UN chief explained that too often, people who suffer from this affliction receive little or no immediate counselling, adding that in humanitarian crises trained mental health professionals are rarely available.“However,” Mr. Ban continued, “it is perfectly possible to train first responders, such as police and fire officers, emergency health staff and humanitarian aid workers to provide ‘psychological first aid’ to people in need.”

He noted examples of this in the Ebola outbreak in Guinea, Liberia and Sierra Leone, along with that of the Syria conflict, and the thousands of displaced people in Greece, Nigeria and South Sudan.

“Psychological first aid is just one component of the broader mental health services integral to national health systems that governments committed to in the World Health Organization’s (WHO) Mental Health Action Plan 2013-2020, underscored the UN chief.According to Mr. Ban, Governments need to develop robust systems of care for the short- and long-term.

“Civil society organizations can support these efforts through raising awareness, community-based programmes and research,” detailed the Secretary-General. “And each one of us can examine how we can offer support to our friends, families and neighbours,” he added.

“On this World Mental Health Day,” Mr. Ban concluded, “let us all show compassion and empathy for those who have survived a crisis and make sure they can access the help they need, for as long as they require it.”

This mental illness affects people of all ages, from all walks of life, in all countries.

The risk of depression is increased by poverty; unemployment; life events, such as the death of a loved one or a relationship break-up; physical illness; and problems caused by alcohol and drug use.

This common disorder causes mental anguish and can impact a person’s ability to carry out the simplest everyday tasks – sometimes causing devastating consequences for relationships with family and friends. Untreated, it can prevent people from working and participating life.

According to the UN health agency, the ‘Depression: let’s talk’ campaign aims to better inform people about the disease, how it can be prevented and treatment options, which will reduce the stigma and lead to more people to seek help.

While treatment usually involves talk therapy and/or antidepressant medication, WHO underscores that talking with trusted people can be a first step towards. 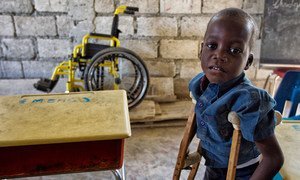 ‘Disability is not inability,’ says Ban, urging equal rights for all to achieve Global Goals

Marking the 10th anniversary of a United Nations treaty that protects the rights of persons with disabilities, senior UN officials today highlighted the critical role people with disabilities play as invaluable partners to achieve the 2030 Agenda for Sustainable Development.