Libya: As situation worsens, UN envoy calls for pause in fighting near Benghazi

UNICEF/Marta Ramoneda
A street sign promotes awareness of explosive remnants of war in the city of Benghazi, Libya. The sign was created by the NGO Handicap International, with support from UNICEF.
6 October 2016

Expressing deep concern over the plight of civilians caught in the cross-fight in a Benghazi neighbourhood, a senior United Nations official in Libya has called for a humanitarian pause to allow aid to reach those in urgent need and as well as a safe passage for those who wish to leave.

“The protection of civilians is the UN's number one priority here,” Special Representative of the Secretary-General for Libya, Martin Kobler, said today in a news release issued by the UN mission in the country (UNSMIL).

“Therefore, I call for a humanitarian pause to allow humanitarian assistance and to reach those in need and to create a safe passage to allow civilians who wish leave to do so in a safe and dignified manner,” he added.

In particular, he emphasized that women and children who wish to leave must be allowed to do so as a first step towards the evacuation of all civilians and prisoners in the city's Ganfouda neighbourhood.

According to reports, the civilians are also suffering shortages of food, water and medicines.

Mr. Kobler, also the head of UNSMIL, added that the mission has been working to support the Libyan mediation process to minimize the suffering in Ganfouda and in that capacity, “stands ready to support in the evacuation process.”

“The use of civilians as human shields and the carrying out of indiscriminate attacks are prohibited by International Humanitarian Law,” stressed Special Representative Kobler, adding: “Such violations would constitute war crimes under the jurisdiction of the International Criminal Court and their perpetrators would be held accountable.” 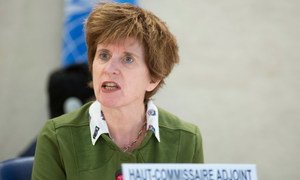 At interactive dialogues on the Democratic Republic of the Congo (DRC), Libya Ukraine, and Burundi, senior UN human rights officials and independent experts today urged the governments to take immediate steps to ensure protection of human rights in their respective countries.