Urgent humanitarian assistance is needed for some 100,000 people trapped in the South Sudanese town of Yei, where the security situation deteriorated rapidly after renewed conflict broke out in Juba, the capital, in early July, the United Nations refugee agency warned today.

“Until now, Yei has been largely spared from the violence and attacks that have plagued the country since December 2013,” William Spindler, a spokesperson of the Office of the UN High Commissioner for Refugees (UNHCR), told reporters in Geneva.

“This is the first time that the population in Yei – primarily farmers living on commercial and subsistence agriculture – has become a direct target of violence, and on suspicion of their belonging to opposition groups. They urgently need humanitarian assistance,” he added.

Yei is situated in Central Equatoria state, close to South Sudan’s borders with Uganda and the Democratic Republic of the Congo (DRC), and about 150 kilometres south-west of Juba.

According to the town church, more than 30,000 people have been displaced into Yei from surrounding areas, following deadly attacks on civilians and looting of private property on 11 and 13 September. They joined several thousand others displaced from nearby Lainya County since mid-July, and up to 60,000 town residents who remain in Yei with no means to leave and who are now in as much need as those displaced by the conflict.

UNHCR’s presence there has been limited to providing protection activities and assistance to refugees from neighbouring Democratic Republic of Congo (DRC) who live in Yei town and nearby Lasu settlement.

“The security situation in Yei deteriorated rapidly after renewed conflict broke out in Juba in early July and came to a head earlier this month, forcing thousands of civilians to flee their homes,” Mr. Spindler said.

A South Sudanese woman prays at Emmanuel Cathedral compound in Yei, South Sudan. She was displaced due to violence in the outskirts of Yei in September 2016. Photo: UNHCR/Rocco Nuri

An inter-agency mission to Yei, led by UNHCR on Tuesday 27 September, observed that tens of thousands of displaced are sheltering in abandoned houses and smaller numbers in church compounds and are facing a serious shortage of food and medicine. Terrorized men and women spoke of horrific violence against civilians before and during their flight, including assault, targeted killing, mutilation, looting and burning of property, the spokesperson said. Several civilians have been hacked to death, including women and infants. There are reports that many young men, aged between 17 and 30, have been arrested on suspicion of siding with the opposition. Displaced people need food, household items, medicines and the children need access to schools, he said.

Mr. Spindler also reported that food prices are skyrocketing, with basic commodities quickly disappearing from the market. Many internally displaced people have reported that their food stocks have been looted. Two local hospitals are functioning at reduced capacity. Lack of high-energy food for malnourished children and breastfeeding mothers is becoming critical. There are indications of increasing sexual and gender-based violence, and unaccompanied and separated children.

The population is unable to leave the town due to limited freedom of movement and lack of resources. With farmers unable to reach their fields, harvests are rotting and the risk of missing the upcoming planting season is very high. This means that people may have no crops next year.

Back in Juba, humanitarian partners are mobilizing to respond to the situation in Yei, including provision of food, non-food items and drugs. A date for access is still not certain.

To improve the security situation, the UN is planning to increase its force in the country. The government has already agreed to the deployment of a 4,000-strong regional protection force mandated by the UN Security Council, in addition to the roughly 12,000 UN peacekeepers already serving in the nation.

The UN Mission, known as UNMISS, was set up in 2011 after South Sudan gained independence from Sudan. It played a major role in trying to protect civilians when war broke out in 2013 between forces loyal to President Salva Kiir and those of then Vice-President Riek Machar.

Deteriorating security in South Sudan has forced more than 200,000 people to flee the country since a fresh fighting broke out around Juba, the capital, on 8 July 2016, bringing the number of South Sudanese refugees in neighbouring countries to over 1 million.

In South Sudan, more than 1.61 million people are internally displaced and another 261,000 are refugees from Sudan, DRC, Ethiopia, and Central African Republic. 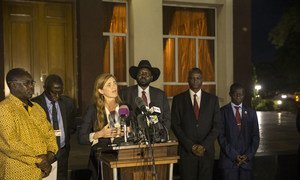