Onus is on 'us' to ensure implementation of 2030 Agenda, Tanzanian Minister tells UN

Highlighting at the United Nations today his country's initiatives to implement the 2030 Agenda for Sustainable Development, the Minister for Foreign Affairs and East African Cooperation of Tanzania emphasized the importance of collective efforts at local, national and international levels to achieve the goals in a timely manner.

“We have integrated the Sustainable Development Goals (SDGs) in our National Development Plans and Strategies, and in collaboration with a broad range of stakeholders, have taken various steps to ensure effective implementation at the national level,” said Augustine Phillip Mahiga, in his address to the General Assembly, and noted national efforts to increase the welfare of all Tanzanians and to ensure that “no one is left behind.”

In his address, Mr. Mahiga also underscored the importance of gender equality and women's empowerment, noting especially that Tanzania has continued to take actions to ensure more representation of women in decision-making, as illustrated by their increasing numbers in its Parliament.

He also highlighted the importance of combatting corruption in the attainment of the Global Goals and called on developed countries to ensure that their “investors and multinational companies [are] accountable by paying due taxes [and] returning assets and funds stolen from developing countries and hidden in their countries so that they can contribute in financing our development endeavours.”

Citing the importance of environment and the need for effective implementation of the Paris Agreement on climate change, the Minister informed the global body that Tanzania was among the first countries to submit their Intended Nationally Determined Contributions (INDCs) on both adaptation and mitigation under the Agreement.

Further, drawing the Assembly's attention to global terrorism, Mr. Mahiga said that his country cooperating with the international community to address the global terrorist threat as well as spoke of national efforts through inaction of laws and frameworks to counter the threat of violent extremism.

Concluding his address, the Minister also welcomed the new steps to bring in more transparency in the selection of the next UN Secretary-General and said that the process should respect geographical rotational principle and take into account gender balance.

“The [selection] of the Secretary-General this year will send a clear signal globally that permanent members of Security Council are ready and willing to undertake the long overdue reforms of the Security Council,” he noted.

In his address, the Minister also spoke of the importance of youth, employment and education as well as of the challenges brought on by drug trafficking. 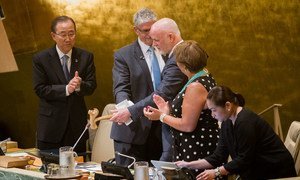 The United Nations General Assembly today opened its 71st session, with an emphasis on ensuring that implementation of the new global development goals, adopted by its 193 Member States last year, is well underway.