Addressing the United Nations General Assembly, Nicaragua’s Vice-President today warned that endemic poverty and inequality have become more noticeable than ever, both in developing and developed countries, especially in vulnerable and marginalized groups, including peoples living under colonial occupation and foreign intervention.

“We must urgently eradicate colonialism and cease military interventions and aggressions in order for the full implementation of the right to self-determination and the development of our peoples,” Vice-President Moises Omar Halleslevens Acevedo told the Assembly’s annual debate.

“The right to development is a right for all. The international community has yet to answer for the millions of human being, to whom this right remains a dream,” he said.

Developed countries must comply, once and for all, with their commitments regarding official development assistance, through additional, predictable and adequate financial resources, he added.

He expressed support for the just aspirations of Taiwan, with 23 million inhabitants, for a greater participation in UN specialized agencies, welcomed the re-establishment of relations between Cuba and the United States, and congratulated Venezuela on having recently assumed the leadership of the Non-Aligned Movement. He also saluted the signing of the peace agreements between the Colombian government and the Revolutionary Armed Forces of Colombia (FARC-EP).

As for Puerto Rico, it is required for the United States, the colonial Power, to resolve this situation through dialogue and negotiation, he said. He showed solidarity with Argentina in the sovereignty dispute over Islas Malvinas, South Sandwich Islands and Adjacent. The United Kingdom must immediately comply with UN resolutions, and initiate direct negotiations with Argentina, he said.

He went on to note that Nicaragua has been recognized by the World Economic Forum as one of the most successful countries in gender equality and the safest country in Central America. The country sustained economy growth of five per cent in the last five years.

“We have achieved this success with a model of partnerships, dialogue and consensus under the leadership of our Government, with the private sector and workers,” he said.

He said Nicaragua rejects, as violations of international law and the UN Charter, the proposals and initiatives brought forth by the United States that, throughout history, has interfered in Nicaragua’s sovereign, political, social and economic processes, particularly during elections.

In her remarks, Delcy Eloína Rodríguez Gómez, the Political Vice-President and Minister for Foreign Affairs of Venezuela, said the main obstacle hampering the world in achieving the Global Goals is the capitalist model which has created deep inequalities threating the very existence of the planet. Indeed, that model is melting the ice caps and spurring illegal wars. She said that even as inequalities deepen, some countries spent more than $1 trillion on arms and munitions last year. The US alone was responsible for some $600 billion of that – an almost impossible figure for some countries to imagine – which it used to finance its wars and imperial aggressions.

“Capitalism is a serious threat to the future of mankind,” she said, condemning the hegemonic interests that are now trying to categorize global ills such as terrorism in ways that suit their own needs. Indeed, certain powers, especially those engaged in the weapons trade, have decided that only some forms of terrorism must be addressed when in fact, the scourge is affecting all nations. She condemned terrorism in all its forms and demanded a concerted effort to root out the scourge, particularly amid the deepening humanitarian crisis in Syria.

Ms. Rodríguez Gómez went on to call for urgent and comprehensive reform of the UN, particularly the Security Council, which must include participation of African and Latin American and Caribbean countries. She also denounced the double standards regarding human rights and urged the United Nations to ensure that the global human rights framework protects all peoples “and not just the elites.”

Closer to home, she said various violent groups have been trying to overthrow the Government and the international community had been notified that Venezuela has been targeted by those seeking to take control of its major strategic natural resources. “Imperial history, which is laden with violence, threatens to be repeated,” she said noting that “new drums of imperialist aggression are beating again in the North.” Venezuela seeks peace and has long called for a development model that is holistic and which strikes a genuine balance with nature, she underscored.

Also addressing the general debate, Guillaume Long, Minister for Foreign Affairs of Ecuador, stressed the need to end the practice of hiding capital in tax havens in order to rectify inequality. In Ecuador, the equivalent of 30 per cent of gross domestic product (GDP) is hidden in tax havens. Poverty could have been substantially reduced if these funds had been invested in the country and taxes have been paid. It is estimated that $30 billion are hidden in tax havens. These are critical resources for development, he said.But to end this practice requires waging a political battle. Ecuador reiterates a call to create an inter-governmental body to achieve tax justice in order to put an end to this shameful practice. Ecuador conducted a referendum to determine whether to prohibit public servants from holding capital in tax havens. This could serve as an example to fight “faceless” capital.

Not only States but also transnational corporations can violate human rights. Chevron-Texaco spilled oil in the Amazon. Ecuador is proposing a legally binding international instrument to hold these companies accountable for such violations. His country has also proposed an environment justice court to punish crimes against nature. 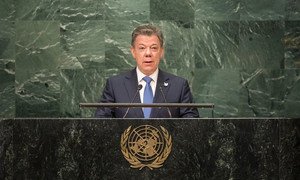 A year after pledging to return to the United Nations General Assembly to announce the end of a 52-years-long civil war that has killed more than 220,000 people and victimized over eight million more, Colombian President Juan Manuel Santos today mounted the self-same podium to declare his nation finally at peace with an accord that can serve as a precedent for the rest of the world.