Addressing the leader’s debate at the United Nations General Assembly, the President of Madagascar today underlined the need to take the commitments made in 2030 Agenda for Sustainable Development, the Addis Ababa Action Agenda on financing for development and the Paris Agreement on climate change into practice.

Addressing the leader’s debate at the United Nations General Assembly, the President of Madagascar today underlined the need to take the commitments made in 2030 Agenda for Sustainable Development, the Addis Ababa Action Agenda on financing for development and the Paris Agreement on climate change into practice.

Highlighting that these global development agreements apply to all countries, President Hery Martial Rajaonarimampianina Rakotoarimanana said, “[These] goals are universal, they target all countries.”

“A sustainable world only can be achieved with ecological transitions in the North and responsible development in the South,” he added referring to the developed and the developing countries.

Reporting that his country is integrating the Sustainable Development Goals (SDGs) into its national development plan, he noted the national agenda accords particular importance to social justice, education and health.

Underscoring the importance of young people to realizing the benefits of the 2030 Agenda, the President called for collective dynamic movement of all countries to assist each other in supporting developing polices for young people so that they can fully contribute to peace and development.

He also pointed out that promoting gender equality and protecting the rights of women and girls are a major priority for the island nation, and he informed the General Assembly about reforms to the national legal framework, and also noted national efforts to protect the rights of persons with disabilities.

Further highlighting the particular importance of the Paris Agreement for Madagascar, especially as the country continues to suffer the effects of climate change, he called on the global community to adopt “responsible development” practices that preserve the environment such as moving away from the expensive polluting sources of energy which are dangerous for the common environment.

Noting investment opportunities in the country, he called for support from the international community and the private sector in Madagascar’s electricity production and renovation and upgrading its water infrastructure.

“If we wish to breathe new life into our planet for future generations, we must be successful in the transition to new kinds of energy at the national and global levels,” he said.

Further noting that foreign direct investment and official development assistance (ODA) should be well managed and channelled to support the implementation of the SDGs, he invited other countries and partners to attend a donor conference in to be held in Paris that aims to mobilize resources for the country’s development programme.

In conclusion, the President emphasized that he is firmly convinced that the UN embodies a universal conscience and respect for international order and said that it is important to respect and follow-through on the commitments made at the global body. 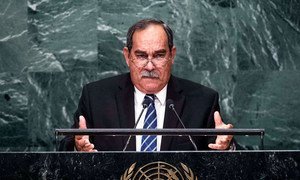 Small island Pacific States threatened with disappearing under the flood of rising oceans took the podium at the General Assembly today to warn that the United Nations remains their last best hope as climate change outpaces efforts to counter it.