Outlining steps towards reconciliation, democracy and alleviation of poverty, President of Sri Lanka expressed his commitment to take necessary action in order to achieve long-term peace and sustainable development, including protecting the environment.

“My intention is to make the people of Sri Lanka the happiest people on Earth,” said President Maithripala Sirisena in his address to the General Assembly today.

Recalling that when he assumed leadership of the country, people were living in fear, the President underscored that his main goal as is to guarantee a free society for all Sri Lankans.

In his address, he further noted that Sri Lanka’s efforts to strengthen rule of law and democracy, and stressed that the country had had “enough experience with a brutal war,” he said that it is now pursuing necessary steps to build lasting peace, including the establishment of peace and reconciliatory programmes in the country.

The President also called on the international community to help his country on its path to achieving long-term peace.

Turning to national development priorities, the Sri Lankan leader said that as an island nation, Sri Lanka plans to develop its fisheries industry based on solid research, and that it would focus its development agenda on providing its people with health services, education and new technologies.

He also said that he would accord priority to implementation of development programmes and economic policies, new innovations and “green economy” policies.

Stressing on importance of a society based on “good morals,” he noted that as a Buddhist country, Sri Lanka could tap into that knowledge and spirituality to solve its own issues and that the wider world could take note of this process.

Highlighting that his goal is to equip the new generation with knowledge and reconciliation, President Sirisena said that he would move ahead with diligence and called on the international community for their help and support in achieving this goal. 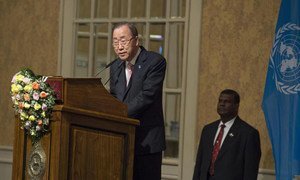 In first visit to Sri Lanka since end of war, Ban flags role of human rights and sustainable development on path to stability

In his first visit to Sri Lanka since the end of its civil war seven years ago, United Nations Secretary-General Ban Ki-moon praised the country’s steps towards peace and reconciliation, while also highlighting the importance of and need for more progress with human rights and sustainable development for that progress.