Addressing the UN General Assembly, the President of Uganda today pointed out that two issues facing his country are missing from the 17 Sustainable Development Goals (SDGs) adopted by 193 countries a year ago.

While the inclusion of energy on the list of SDGs is a departure from the past global agendas, there are two crucial bottlenecks that are missing in those goals, President Yoweri Kaguta Museveni said on the opening day of the general debate.

“All the past mistakes and the present ones are linked to this problem,” he said, referring to pseudo-ideology of sectarianism and chauvinism of groups. “Imperialism, the slave trade, colonialism, neo-colonialism, the ongoing sectarian conflicts in many parts of the world, all, in one way or another, spring from pseudo-ideology,” he said.

“Abandon all forms of chauvinism and the world will be safer for everybody,” he said.

The second bottleneck is fragmented markets in Africa, he said. It is easy to trade with China, India, the United States, Russia, Brazil or Indonesia because they are huge markets, each under one political authority. In contrast, Africa has fragmented markets that must be rectified, he said, welcoming the recent agreement to create a common market for the whole of Africa.

“Remember that when I buy what is produced by your factory, I am supporting your prosperity and when you buy what I produce, you are supporting my prosperity,” he said.

Mr. Museveni is among the many leaders who will address the general debate of 71st General Assembly. The Assembly's high-level segment opened this year with the adoption of the New York Declaration as the outcome of yesterday's first-ever UN Summit for Refugees and Migrants. Made up of all the 193 Member States of the United Nations, the Assembly provides a forum for multilateral discussion of international issues covered by the UN Charter. 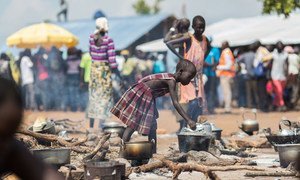 The countries hosting refugees from their crisis-gripped neighbour, South Sudan, are straining under the sheer weight of the ongoing exodus as desperate people continue to arrive at their borders daily, joining hundreds of thousands of others that fled for safety before them, the United Nations has warned.