“Solutions will involve everything from regulation to disruptive innovation – and everyone from world leaders and chief executives, to educators, activists and citizens,” Mr. Ban told the UN Private Sector Forum, which was held on the margins of the high-level segment of the General Assembly’s 71st session, which kicked off today.

The UN chief recalled that he started this annual Forum back in 2008 to bring the voices of chief executives and civil society leaders to the high-level week, during which political leaders from around the world gather at the UN Headquarters in New York to address the Assembly.

“I expect that my successor will carry forward this important dialogue, and will further grow our global partnership with business through the UN Global Compact and across the Organization,” said Mr. Ban, whose second five-year term as the Secretary-General will expire on 31 December.

The Global Compact is a movement of responsible companies and stakeholders to create a sustainable future in line with UN principles. Its signatories are active in 165 countries, and nearly every UN entity is partnering with companies to advance common objectives, from disaster relief and sanitation, to women’s empowerment and education.

In September last year, the United Nations adopted the 2030 Agenda for Sustainable Development for people, the planet, peace, prosperity and partnership, followed by the historic Paris Agreement on climate change in December and the new Agenda for Humanity in May this year.

“Now, we have to secure the way forward to 2030,” he said, adding that a strong start is essential to a successful finish in 2030.

The time has come for Governments to integrate the Sustainable Development Goals (SDGs) and the Paris Agreement into their national agendas, he said. But “we will also need to activate business as never before, and quickly. We are spreading the word far and wide that every business has a responsibility to improve our world.”

At today’s Summit for Refugees and Migrants, world leaders are working towards a better, more unified response to that will save lives, protect rights and secure their future.

“Businesses also have a crucial role in this effort. I applaud all those which are taking action. But we need much more engagement,” he said, also calling on the private sector to combat xenophobia and discrimination in the workplace and communities, urging businesses to provide equal job opportunities for refugees and migrants, and invest in education initiatives for displaced youth. 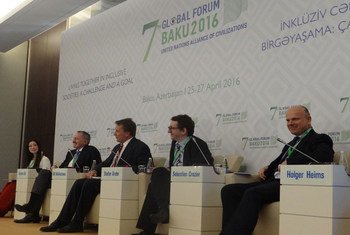 25 April 2016
At a United Nations Forum under way in the Azerbaijani capital of Baku, senior UN officials today stressed the important role the private sector plays in creating inclusive communities, underscoring that companies cannot operate successfully in societies that fail.