“As one of the world’s most aid-dependent countries, it will be difficult for Afghanistan to achieve self-reliance as long as there is conflict,” Special Representative of the Secretary-General Tadamichi Yamamoto told members of the Security Council during a briefing.

“Conflict diverts resources, which would be better spent on developing Afghanistan and helping its people. Peace is therefore a requirement,” he underlined.

Mr. Yamamoto, who is also head of the UN Assistance Mission in Afghanistan (UNAMA), went on to stress the need to resolve political tensions between two senior leaders in the Government to ensure that it is stable.

“No effective policies are possible if the Government is internally divided,” noting that tensions had surfaced, with public criticism by Chief Executive Abdullah Abdullah about

what he viewed as the incomplete implementation of the political agreement of 2014.

Mr. Yamamoto noted that the two leaders have met several times since then to try to identify the issues and to seek solutions. He said efforts are still under way, and further meetings are expected.

He nevertheless called on the leaders to show to the people of Afghanistan and to the international community that they are able to govern effectively. He also welcomed the recent signature by President Ashraf Ghani of the legislative decree for electoral reform as a constructive development in this regard.

“The political agenda must progress constructively, political stability must be maintained; and the elections must take place,” he said, telling the Council that the two year anniversary of the 2014 political agreement that established the National Unity Government draws near, the political oppositions have increasingly challenged the legitimacy of the Government.

Drawing attention of the 15-member body to the volatile security situation within the country, the UN official expressed concern that the toll extracted by violence on civilians continues to increase.

The Bish-Bator compound in Afghanistan where around 650 conflict-displaced families live. Photo: OCHA Afghanistan

“Nowhere is this trend more apparent than for children, among whom there has been an 18 per cent increase in casualties, with 388 children killed in six months,” he reported.

He noted that the country’s health and social systems could also face further strain as the number of people newly displaced by the conflict is being added to by a massive increase in the number of Afghan families returning back from Pakistan.

“If current trends continue, Afghanistan will have to meet the needs of at least one million people on the move,” said Mr. Yamamoto, adding that unless urgent measures are taken, thousands of families could suffer due to the upcoming winter season.

In his briefing, Mr. Yamamoto also noted some positive developments. In particular, he welcomed President Ghani’s comprehensive, long-term approach to tackling corruption, which seeks to develop the architecture needed to prevent corruption, as well as hold those responsible for corruption to account.

He also acknowledged the Government’s continued progress on other reform and mutual accountability commitments, in particular preparing for the country’s National Peace and Development Framework and successfully negotiating a new International Monetary Fund (IMF) programme.

Speaking on the upcoming Brussels Conference on Afghanistan, Mr. Yamamoto called upon the Government to “seize this opportunity” that meeting will offer.

He also welcomed the Government’s plan to hold a side event at the Conference to spotlight the challenges faced by the country’s women who were widowed by the long conflict.

Concluding his briefing, Mr. Yamamoto said that the country has an opportunity to build on its achievements of the past fifteen years and move towards stability and self-reliance.

“With effective government and the continued support of the international community it has every chance of succeeding,” he added. 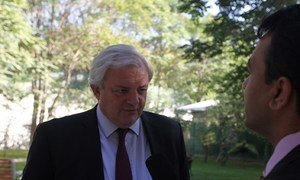