UN Photo/Rick Bajornas
Secretary-General Ban Ki-moon briefs the press on the occasion of the 71st Session of the General Assembly.
14 September 2016

United Nations Secretary-General Ban Ki-moon said today that the global challenges pertaining to refugees and migrants, climate change, and the war in Syria are the major topics that will likely figure prominently in this year’s high-level week at the United Nations.

“This year’s high-level week at the United Nations comes at a critical time,” Mr. Ban told a press conference at Headquarters in New York, previewing activities that will take place at the annual session, when international attention is focused on the work under way at UN.

World leaders are scheduled to address next week’s general debate and other events that will take place during the high-level segment of the General Assembly’s 71st session. With the Secretary-General’s second five-year term expiring on 31 December, this will be Mr. Ban’s last high-level week as the UN chief.

“We will seek progress in resolving protracted conflicts and rising tensions in Africa, Asia, Europe and the Middle East. We will strive to continue the momentum towards implementing the Sustainable Development Goals, our plan of action for peace and prosperity on a healthy planet,” he said.

“But amid the whirlwind, three challenges stand out,” he said at the press conference.

First, he said, the international community must come together in a spirit of shared responsibility for the world’s refugees and migrants. More countries must resettle more people who have been forced from their homes. More countries must recognize the benefits of migration. And everyone, everywhere, must stand up against the animosity that so many refugees, migrants and minority communities face.

The Declaration to be adopted at next Monday’s Summit for Refugees and Migrants marks a major step forward, Mr. Ban said, noting that on this occasion the International Organization for Migration (IOM) will join the UN family and a global campaign will be launched to fight xenophobia.

“The refugee and migration challenge is one we can, and must, tackle together,” he said.

Second, Mr. Ban said he is pushing for the entry into force of the Paris Agreement on climate change before the end of this year. The world’s two largest emitters, China and the United States, recently joined the accord.

“Now we need just 28 more countries, representing 16 per cent of global emissions, to cross the necessary threshold,” he said, drawing attention to the 21 September special event at which countries can deposit their ratification instruments with the Secretary-General.

“Third, while many conflicts are causing enormous pain, none is causing so much death, destruction and widespread instability as the worsening war in Syria,” he said.

While welcoming the reinstatement of the cessation of hostilities following the understanding reached between the Russian Federation and the United States, Mr. Ban said the UN is positioned to utilize this crucial opportunity to immediately deliver vital humanitarian assistance to Aleppo and other besieged and hard-to-reach locations throughout Syria.

“It is essential that intra-Syrian negotiations resume so that Syria’s long-suffering people feel a real change in their daily lives. Major countries with influence have a duty to use their influence and seize this latest opportunity to pursue a political solution to end this catastrophic conflict,” he said.

Describing the past 10 years as “a decade of progress and setback alike,” he said that the adoption of the 2030 Agenda for Sustainable Development and the Paris Agreement, and the establishment of UN Women have been among the high points, while the inability to resolve several protracted conflicts has been a source of tremendous pain.

“But in the time still left to me, I am focused entirely on the work at hand and on what I know can be achieved by Member States, civil society, the private sector and others working in partnership to serve the Charter’s ‘we the peoples,’” he concluded.

The annual general debate will begin at UN Headquarters on 20 September. Member States will gather ahead of that, on 19 September, for the Assembly’s meeting on refugees and migrants. Made up of all the 193 UN Member States, the Assembly provides a forum for multilateral discussion of international issues covered by the UN Charter. 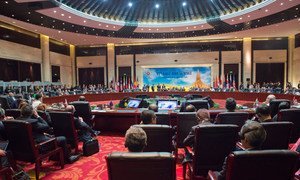