“Stakeholders from fishing, shipping, energy generation and tourism, to list a few, require responsive and innovative solutions to turn climate change impacts into opportunities,” he added.

The two-day conference, which kicked off today in the island nation off Africa’s east coast, aims to help identify these opportunities to enhance the region’s ability to build climate-resilient ocean economies.

According to FAO, fisheries and aquaculture make a significant contribution to food security and livelihoods of millions of people along the world’s seashores and waterways. Global production was estimated at 153 million tonnes in 2012, supplying around 18.4 kilogrammes per capita per year and 16.5 per cent of global animal proteins and essential micronutrients. While fish production from capture fisheries has stagnated at around 88 to 90 million tonnes over recent years, the demand for fish and fishery products has continued to rise. In all, global ocean economic activity is estimated at $3-5 trillion.

Traders wait to sell their fish inside Mogadishu’s fish market in the Xamar Weyne district of the Somali capital. Photo: AU-UN IST/Stuart Price

African nations are increasingly realizing the critical need to diversify beyond land-based activities and build their country’s often rich relationships with the sea, the FAO Director-General said in his remarks to the gathering, adding that these relationships are becoming less and less predictable due to environmental changes.

“Coastal communities are already being affected by a combination of ocean warming, rising sea levels, extreme weather events, salt-water intrusions, ocean acidification and subsequent changes to the resources they depend on for food and livelihoods,” he said.

The goal of the international community should be not only building a sustainable green economy, but also a blue one

Yet, attention to climate change impacts on the ocean has lagged behind concerns for impacts on land and atmosphere, Mr. Graziano da Silva said, noting that this has to change in order to unlock the full potential of so-called ‘blue growth’ in broader marine and maritime economies, and prevent others from losing their existing livelihoods.

The UN official also underscored the disproportionate impacts on small island developing States, saying that “this has become a fight for survival” for these nations.

Illegal, unreported and unregulated fishing also puts additional stress on oceans and marine resources, siphoning off billions worldwide in government revenue in the process, the news release said. For this reason, FAO has been urging Governments to sign on to the international Port State Measures Agreement that recently entered in to force and aims to counter such fishing approaches.

Currently, however, only 13 out of 34 small island developing states are party to the agreement, of which nine countries are in Africa, Mr. Graziano da Silva noted.

In his speech, the FAO chief also highlighted the role of ocean health in the UN’s new Sustainable Development Goals, along with the success of last year’s UN climate conference in Paris (COP21), where marine health featured prominently for the first time.

Looking ahead to the upcoming 22nd session of the Conference of the Parties (COP 22) to the UN Framework Convention on Climate Change (UNFCCC) in Morocco in November this year, he said FAO will highlight how oceans can help grow economies and manage climate change at the same time.

“The goal of the international community should be not only building a sustainable green economy, but also a blue one,” Mr. Graziano de Silva concluded. 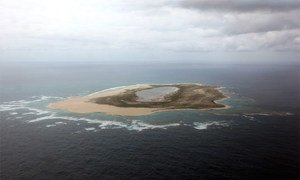 The United Nations Educational, Scientific and Cultural Organization (UNESCO) today welcomed the establishment by US President Barack Obama of the largest nature reserve in the world, done through expanding a marine reserve in the state of Hawaii.