A statement issued by Mr. Ban's spokesperson recalled that four years ago, the Colombian Government and the FARC-EP set out to resolve through dialogue one of the world's oldest armed conflicts. Today, the statement continued, they announced the end of the negotiations “and will deliver to the Colombian people the results of their discussions.”

Since 2012, the parties have been in talks hosted in Havana, Cuba. Throughout the discussions, negotiators have reached agreement on key issues such as political participation, land rights, illicit drugs and victims' rights and transitional justice. Among other developments, the Government and the FARC-EP announced in May an agreement to release and reintegrate child soldiers from the opposition force. The parties also announced the establishment of a gender sub-commission to bolster the voice of women in the peace process.

In June, the Secretary-General travelled to Havana, where he witnessed the bilateral signing of a ceasefire and the laying down of arms and noted that the “peace process validates the perseverance of all those around the world who work to end violent conflict not through the destruction of the adversary, but through the patient search for compromise.”

In the statement issued today, Mr. Ban warmly congratulated President Juan Manuel Santos, FARC-EP leader Timoleón Jiménez and their negotiating teams in Havana for their hard work and patience in reaching this stage in the process. The UN chief also congratulated the many Colombian organizations and citizens who have contributed to the talks with their proposals and encouragement.

The Secretary-General also commended the guarantors, Cuba and Norway, and accompanying countries Chile and Venezuela, for their “unfailing support” to the talks.

“Now that the negotiations have concluded, an equally determined and exemplary effort will be required to implement the agreements,” Mr. Ban underscored in the statement, calling upon the international community to lend its full support to Colombia at this new and critical stage of the peace process.

The United Nations will strive to continue and intensify the support it has given to peace efforts over the years through its agencies, funds, and programmes, and the UN Mission in Colombia, which is mandated to verify the ceasefire and the laying down of arms, said the statement.

“We will stand with Colombia in its drive to build a future in peace,” it concluded. 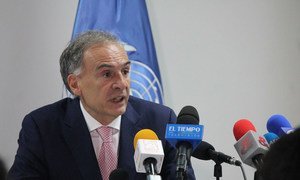 The head of the new United Nations political mission in Colombia today pledged the world body’s steadfast support for the full implementation of the accord reached by the Colombian Government and the Revolutionary Armed Forces of Colombia - People’s Army (FARC-EP), which seeks to bring an end the longest-running conflict in the Western Hemisphere.