A new report published by the United Nations World Intellectual Property Organization (WIPO) has shown that for the first time, a middle-income country, China, has joined highly developed economies among global leaders in innovation.

However, despite China’s rise, an “innovation divide” persists between developed and developing countries, according to the Global Innovation Index 2016, released today by the WIPO, Cornell University, and the multi-nation business graduate school INSEAD.

Switzerland emerged as the global leader among innovative economies followed by Sweden, the United Kingdom, the United States and Finland. Switzerland ranked first in the 2015 index as well.

WIPO also noted that the 2016 findings point to an increasing awareness among policymakers that fostering innovation is crucial to a vibrant, competitive economy.

“Investing in innovation is critical to raising long-term economic growth,” said WIPO Director-General Francis Gurry. “In this current economic climate, uncovering new sources of growth and leveraging the opportunities raised by global innovation are priorities for all stakeholders,” he added.

“This was a result of slower growth in emerging economies and tighter research and development budgets in high-income economies – this remains a source of concern,” it noted.

According to WIPO, among the GII 2016 leaders, four economies – Japan, the US, the UK, and Germany – stand out in “innovation quality,” a top-level indicator that looks at the calibre of universities, number of scientific publications and international patent filings. China ranked 17th in innovation quality, making it the leader among middle-income economies for this indicator, followed by India, which has overtaken Brazil.

That said, since 2012, Sub-Saharan Africa has had more countries than any other region among the group of “innovation achievers” – countries that perform better than their level of development would predict. This year, Kenya, Madagascar, Malawi, Mozambique, Rwanda, and Uganda stood out.

“As economic growth in Sub-Saharan Africa is slowing, the GII 2016 shows that [the region] must preserve its current innovation momentum, while continuing to diversify economies away from oil production and commodity revenues,” noted WIPO.

Average regional performance shows strengths in the ease of starting a business, information and communication technologies (ICTs), business-model creation, and relative expenditure on education, with weaknesses in firms conducting global research and development, high-tech exports, the quality of local universities and number of scientific publications.

The press release further added that in general, further efforts are required in Human capital, Research and Infrastructure.

Highlighting the importance of investment in improving innovation quality as essential for closing the “innovation divide”, co-editor Soumitra Dutta, Dean at the Cornell College of Business pointed out that: “While institutions create an essential supportive framework for doing so, economies need to focus on reforming education and growing their research capabilities to compete successfully in a rapidly changing globalized world.” 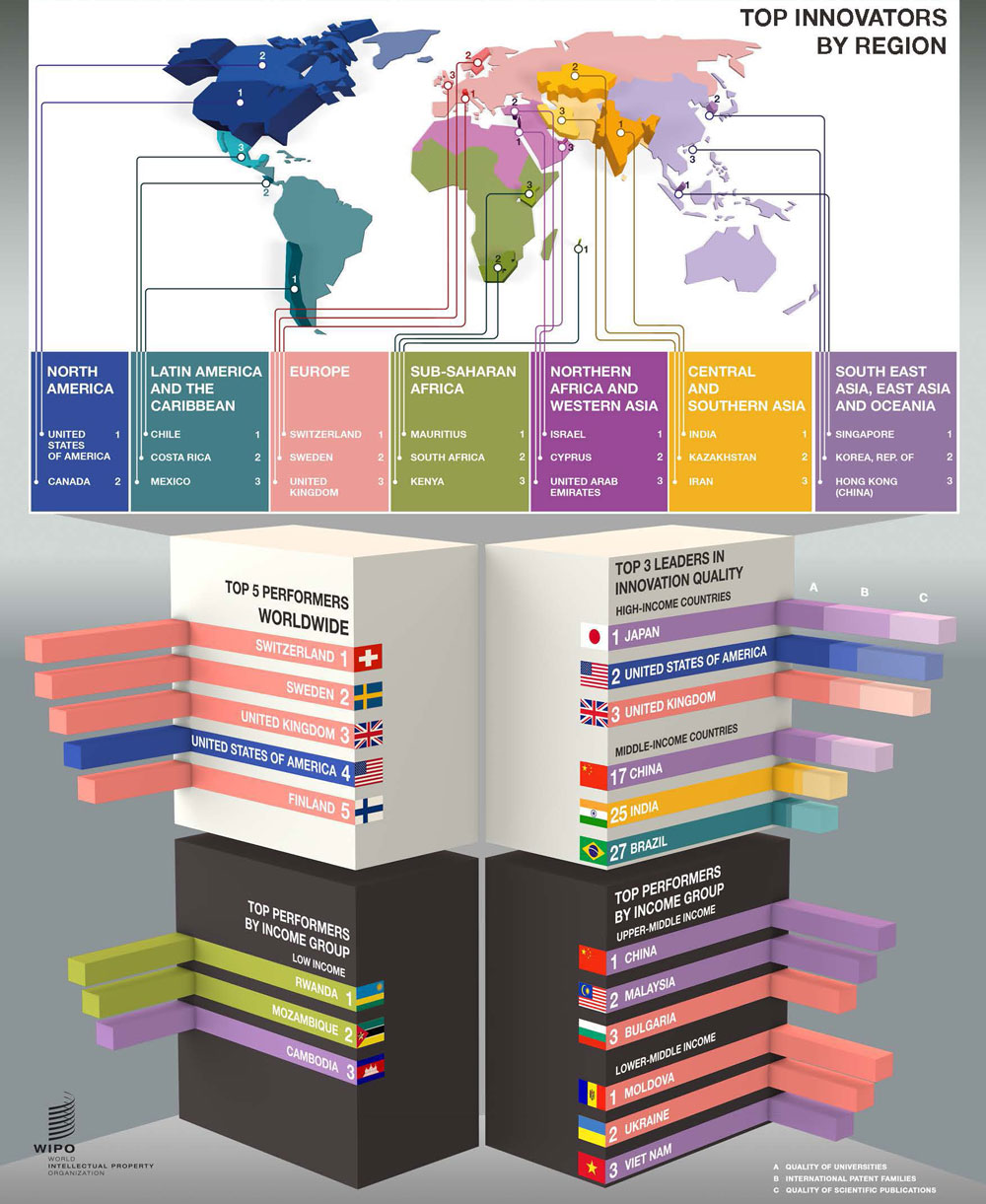 The report also found that Europe benefits from comparatively strong institutions and well-developed infrastructure, while room for improvement is found in business sophistication and knowledge and technology outputs.

Pointing to the benefits of innovation, Bruno Lanvin, INSEAD Executive Director for Global Indices, and co-editor of the report said, “Some may see globalization as a trend in search of its ‘second breath.’ Yet, the relative contraction of international trade and investment flows does give even more strategic importance to the two sides of global innovation: on one hand, more emerging countries are becoming successful innovators, and on the other hand, an increasing share of innovation benefits stem from cross-border co-operation.”

The Global Innovation Index 2016 (GII) explores the rising share of innovation carried out via globalized innovation networks, finding that gains from global innovation can be shared more widely as cross-border flows of knowledge and talent are on the rise. It also concludes that there is ample scope to expand global corporate and public R&D cooperation to foster future economic growth.

At the national level, the report says that innovation policies should more explicitly favour international collaboration and the diffusion of knowledge across borders. New international governance structures should also aim to increase technology diffusion to and among developing countries.

Published annually since 2007, the GII is a leading benchmarking tool for business executives, policy makers and others seeking insight into the state of innovation around the world. Policymakers, business leaders and other stakeholders use the GII to evaluate progress on a continual basis.

The WIPO press release added that this year’s study benefited from the experience of its Knowledge Partners, A.T. Kearney and IMP³rove – European Innovation Management Academy, the Confederation of Indian Industry and du, as well as of an Advisory Board of international experts.

The core of the GII Report consists of a ranking of world economies’ innovation capabilities and results. Recognizing the key role of innovation as a driver of economic growth and prosperity, and the need for a broad horizontal vision of innovation applicable to developed and emerging economies, the GII includes indicators that go beyond the traditional measures of innovation such as the level of research and development.

♦ Receive daily updates directly in your inbox - Subscribe here to a topic.
♦ Download the UN News app for your iOS or Android devices.
innovation

The way in which creative works are produced, distributed and enjoyed around the world has been reimagined as a consequence of digital technology, the head of the United Nations World Intellectual Property Organization (WIPO) said today.