The Security Council today extended for two weeks the United Nations Mission in South Sudan (UNMISS), allowing time for its membership to consider options on adapting the operation’s mandate amid renewed violence in the world’s youngest country.

With the mandate of UNMISS set to expire in 48 hours, the Council unanimously approved a short extension – through 12 August – by a resolution that also authorized the Mission “to use all necessary means to carry out its tasks.”

The Council’s action comes as deadly clashes between rival factions loyal to President Salva Kiir and First Vice-President Riek Machar have, since early July, sent thousands of civilians fleeing the capital, Juba. UNMISS compounds and civilian protection sites have been attacked. The UN refugee agency has reported that thousands of South Sudanese, mostly women and children, have crossed into Uganda since fighting erupted, including an estimated 8,337 refugees on 21 July, setting a single-day record since the influx began in 2016.

Despite the August 2015 peace agreement that formally ended the war – which began in late 2013 after a simmering political face-off between President Kiir and his then former Vice-President Mr. Machar boiled over – conflict and instability has also spread to previously unaffected areas in the Greater Equatoria and Greater Bahr-El-Ghazal regions of South Sudan. This past month, deadly clashes in Wau resulted in the deaths of more than 40 people, while up to 35,000 fled their homes.

For his part, UN Secretary-General Ban Ki-moon has urged calm on all sides and called on the leaders to do everything in their power to de-escalate the hostilities, saying the “renewed violence is outrageous. It is yet another grievous setback. It deepens the country’s suffering. It makes a mockery of commitments to peace.”

Speaking to reporters at UN Headquarters on 11 July, Mr. Ban called for massive reinforcement of UN action in South Sudan, saying: “When a Government cannot or will not protect its people, and when warring parties seem more intent on enriching and empowering themselves at the expense of their people, the international community has a responsibility to act.”

Two days later, on 13 July, Under-Secretary-General for Peacekeeping Operations Hervé Ladsous told the Security Council that given the unstable security situation in South Sudan following clashes between Government and opposition forces which left some 272 people, including 33 civilians, dead, the UN Mission there should be extended until the end of August to allow a rapid assessment on the need for a stronger mandate.

“The Secretary-General's recommendation for a technical roll-over of the UNMISS mandate remains valid and necessary, while we conduct an assessment of the requirements to address the situation on the ground,” he said, adding that the temporary arrangement would give the Secretariat time to do a quick assessment, consult the region and the African Union and make recommendations to the Council.

He said that if the Mission needed to be reinforced, including through additional troops and more robust capabilities such as attack helicopters and unmanned aerial vehicles to fulfil a “protection of civilians” mandate, it would be imperative that such reinforcements implement the same mandate as all other troops, and answer to the same chain of command. 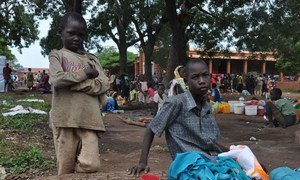 Ahead of a meeting with the United Nations Security Council tomorrow on South Sudan, Secretary-General Ban Ki-moon has urged the body to impose an immediate arms embargo, enact additional targeted sanctions on leaders and commanders blocking implementation of the peace deal, and to fortify the UN mission in the country, which has seen a resurgence of deadly violence in recent days.