As the humanitarian crisis reaches distressing levels in Syria, particularly in and around battle-torn Aleppo, the United Nations envoy for the country welcomed today initiatives aimed at assisting the civilian population trapped amid the fighting and, “under the right circumstances,” the implementation of humanitarian corridors.

“Therefore, we have been studying with great attention and interest the Russian initiative that was sketched yesterday. We are still waiting for more information,” Staffan de Mistura, the UN Special Envoy for Syria, told journalists in Geneva, referring to Russia’s proposal to establish several so-called “exit corridors” that would allow for the distribution of food, as well as provide an opportunity for civilians to flee Aleppo and wider humanitarian challenges throughout the war-torn country.

In the meantime, he said, it is critical to establish “on a sustainable basis and irrespective of humanitarian corridors” the 48 hour pause in fighting proposed earlier in the week by UN Emergency Relief Coordinator Stephen O’Brien, during his briefing to the Security Council on the dire situation in Aleppo.

“How do you expect convoys of humanitarian aid to actually reach those people if there is shelling and bombing from the air and from the ground,” Mr. de Mistura emphasized.

Hailing the work done of the UN teams and their partners on the ground in bringing much-needed assistance to affected populations in Daraya, Kefraya, Fou’a, Mouaddamiyah and other places in the country, the Special Envoy underscored that the UN and its partners should be the ones who actually deliver aid, given their in-depth experience and mandates.

“Our suggestion to Russia is to actually leave the delivery of aid through corridors to the UN and its partners. The UN and its humanitarian partners, as you know, know what to do. They have the experience; that’s our job,” Mr. de Mistura stated.

As for the current situation on the ground, he said Aleppo city is now almost completely encircled by Syrian troops. As such, civilians trapped there should not be forced to leave, and if any do want to leave, the choice should be their own. “There needs to be guarantees on the protection of civilians, whether they choose to remain in Eastern Aleppo, or move to other areas of their choice, as offered through the corridors,” he stressed.

Earlier in the week, Mr. O’Brien warned the Security Council that time is running out, and those with influence, “must act now” to establish a weekly, 48-hour humanitarian pause so much-needed assistance could be provided to the people trapped in Aleppo.

In a statement yesterday, Mr. O’Brien re-emphasized the dire nature of the situation in Aleppo and reiterated his demand for safe, regular and sustained access to the quarter of a million people trapped behind the front lines, and stressed that “all options must be considered.” 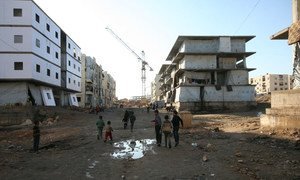 Proposed humanitarian corridors in Aleppo must be guaranteed by all sides, says UN relief chief

Amid reports that Aleppo is ‘de facto besieged,’ as the war-battered city is now almost completely encircled by Syrian troops, the United Nations Emergency Relief Coordinator today reiterated his demand for safe, regular and sustained access to the quarter of a million people trapped behind the front lines, and stressed that “all options must be considered.”