Two United Nations agencies warned the UN Security Council today that ongoing conflicts around the world have pushed more than 56 million people into “crisis” or “emergency” levels of food insecurity and are hindering efforts to eradicate malnutrition.

According to a series of 17 country briefs prepared for the Security Council by the UN Food and Agriculture Organization (FAO) and UN World Food Programme (WFP), Yemen and Syria top the list in terms of sheer numbers of people whose food security is being negatively impacted by ongoing conflict.

“Conflict is a leading cause of hunger – each famine in the modern era has been characterized by conflict,” FAO Director-General José Graziano da Silva and WFP Executive Director Ertharin Cousin said today in a joint news release.

“[It] undermines food security in multiple ways: destroying crops, livestock and agricultural infrastructure, disrupting markets, causing displacement, creating fear and uncertainty over fulfilling future needs, damaging human capital and contributing to the spread of disease among others,” they added.

According to the agencies, expressed in terms of the Integrated Food Security Classification Phase (IPC) scale, 14 million people – more than half the population - in Yemen are in a state of hunger crisis or emergency. Indeed 8.7 million people – 37 per cent of the pre-conflict population – in Syria need urgent food, nutrition and livelihoods assistance.

89 per cent of all Syrian refugees currently in Lebanon require urgent food, nutrition and livelihoods assistance

Furthermore, a staggering 89 per cent of all Syrian refugees currently in Lebanon also require urgent food, nutrition and livelihoods assistance.

The briefs also noted that in South Sudan, where the situation is rapidly deteriorating, 4.8 million people are in urgent need of food, nutrition and livelihoods assistance. Similarly, millions of people are still wrestling with high levels of food insecurity in countries that are coming out of extended periods of civil strife such as the Central African Republic (CAR) and Colombia.

At least 7 million people across Yemen are living under emergency levels of food insecurity. A further 7.1 million people are in a state of crisis, according to the latest assessment. Photo: WFP/Asmaa Waguih

The agencies also warned that post-conflict countries with high food insecurity are 40 per cent more likely to relapse into conflict within a 10-year timespan if hunger levels are not addressed.

In other countries, while the overall absolute numbers of people facing food insecurity are lower, the share of people experiencing severe levels of food insecurity accounts for over half of the total population. In Burundi and Haiti, 23 per cent and 19 per cent of people are at IPC level 3 or 4, respectively, while in the CAR, 50 per cent of the population is at IPC scale 3 or worse.

The IPC scale is an evidence-based approach which allows comparability of situations across countries and over time. According to the scale, levels 3 and 4 represent crisis and emergency levels, respectively, and level 5, the highest level, indicates the famine.

The two UN agencies also pointed out that according to recent estimates, approximately half of the global poor now live in states characterized by conflict and violence. In such places, the people can be up to three times more likely to be undernourished than those living in more stable areas.

“Addressing hunger can be a meaningful contribution to peacebuilding,” emphasized Mr. Graziano da Silva and Ms. Cousin, adding, “The 2030 Agenda [2030 Agenda for Sustainable Development] recognizes peace as a vital threshold condition for development, as well as a development outcome in its own right.”

An additional brief on the regional Lake Chad crisis affecting Nigeria, Niger, Chad and Cameroon was also submitted. There, violence associated with Boko Haram has seen the numbers of displaced people triple over the past two years accompanied by rising levels of hunger and malnutrition. 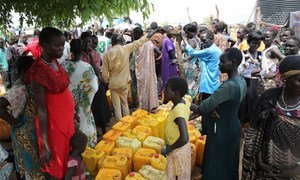 Millions of people facing hunger in South Sudan will be driven to the brink of catastrophe if renewed flashes of violence derail the fragile peace process, the United Nations Food and Agriculture Organization (FAO) said today, warning that the human costs of recent fighting in Juba will be compounded by deepening hunger across the entire country if peace does not hold.