“The concept has now been redefined much more as a preventive action, something that is an activity that is undertaken by the whole United Nations system,” UN Assistant-Secretary-General Oscar Fernandez-Taranco told the UN News Centre.

“It’s actually at the heart, it’s at the core of what the UN was established to do, which was basically to prevent conflict, prevent future generations from the scourge of war.”

Peacebuilding Commission as a bridge within the UN

The Peacebuilding Commission is “a unique inter-governmental body” that sits between the UN Security Council, whose 15 members are primarily tasked with maintaining peace and security in the world; the General Assembly, whose membership includes all 193 Member States; and the Economic and Social Council, or ECOSOC, which works with the 14 specialized UN agencies.

In a keynote interview with UN News Centre, Assistant-Secretary-General Oscar Fernández-Taranco speaks about the evolution of peacebuilding, from a post-conflict idea to a preventive action undertaken by the whole UN system, and how this seamless approach facilitates UN's efforts in addressing conflicts and challenges.

Its membership also includes representatives from the countries who are the top financial and troop contributors to the UN, as well as from the World Bank and the International Monetary Fund, and regional bodies such as the European Union and the Organization of the Islamic Conference.

“Because of its unique membership, it is a unique platform that allows a certain conversation with Member States,” Mr. Fernandez-Taranco said.

Those conversations are now evolving to be not just about countries coming out of conflict, but how the different parts of the UN can work more closely together to prevent countries from slipping back into conflict. So that peacebuilding, which concerns the entire UN system, works across all three of its platforms: peace and security, human rights and development.

Peacebuilding doesn’t happen in New York. It happens in the field. But New York can be a very important forum for discussions and a diplomatic platform that can help national and regional actors

This is the idea behind landmark resolutions adopted in April nearly simultaneously by the Security Council and the General Assembly (S/RES/2282 and A/RES/70/262). The resolutions expanded peacebuilding from a post-conflict process to “activities aimed at preventing the outbreak, escalation, continuation and recurrence of conflict” which “should flow through all three pillars of the UN’s engagement at all stages of conflict.”

This includes also addressing root causes of conflict, ensuring national reconciliation, and moving the country towards recovery, reconstruction and development.

These resolutions are reinterpreting the role of the Peacebuilding Commission to be much more focused on early response, “empowering it to be much more creative, much more flexible and much more engaging,” Mr. Fernandez-Taranco said.

They also put more emphasis on the Peacebuilding Commission as a bridge – connecting the different parts of the UN with regional groups and donors, so that as signs of a conflict happen – the UN can react much more quickly.

So peacebuilding becomes not just about building peace within communities from a more traditional point of view, which consists of bringing different representatives together to talk, but also includes supporting basic safety and security, such as disarmament, to supporting elections, helping to provide water and creating jobs.

“The recent discussions among Member States are challenging the Peacebuilding Commission to be much more relevant right now,” noted Mr. Fernandez-Taranco. 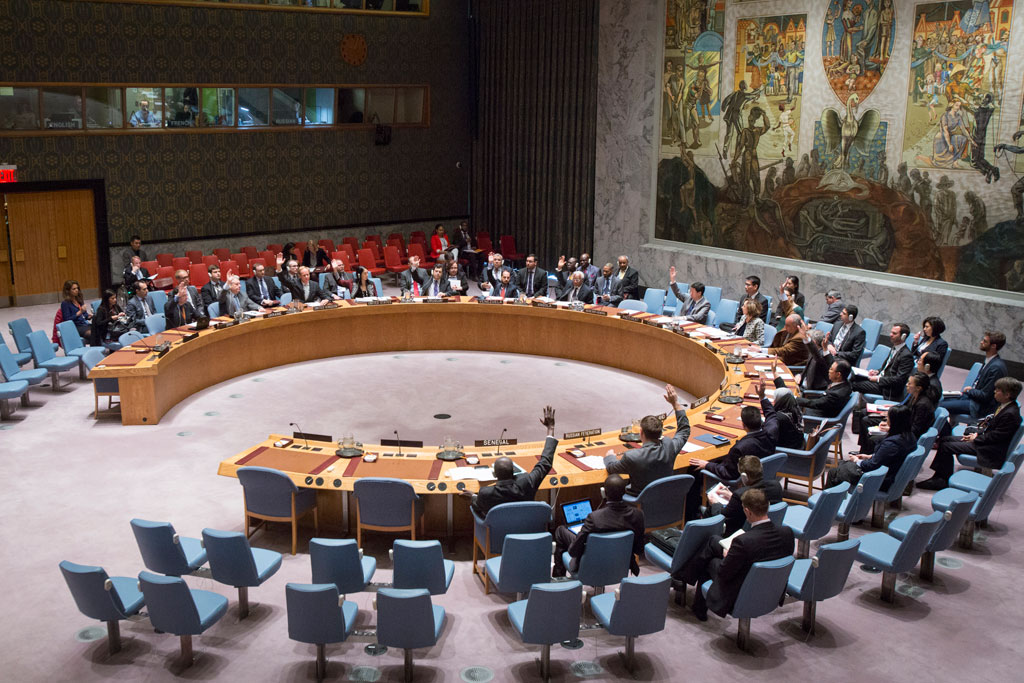 Landmark resolution 2282, unanimously adopted by The Security Council, on the UN Peacebuilding Architecture, enables the International Community to emphasise on expanding peacebuilding from a post-conflict process to “activities aimed at preventing the outbreak, escalation, continuation and recurrence of conflict” providing the UN, including its specialized agencies, regional groups and donors to react much quicker to signs of conflict. UN Photo/Manuel Elias 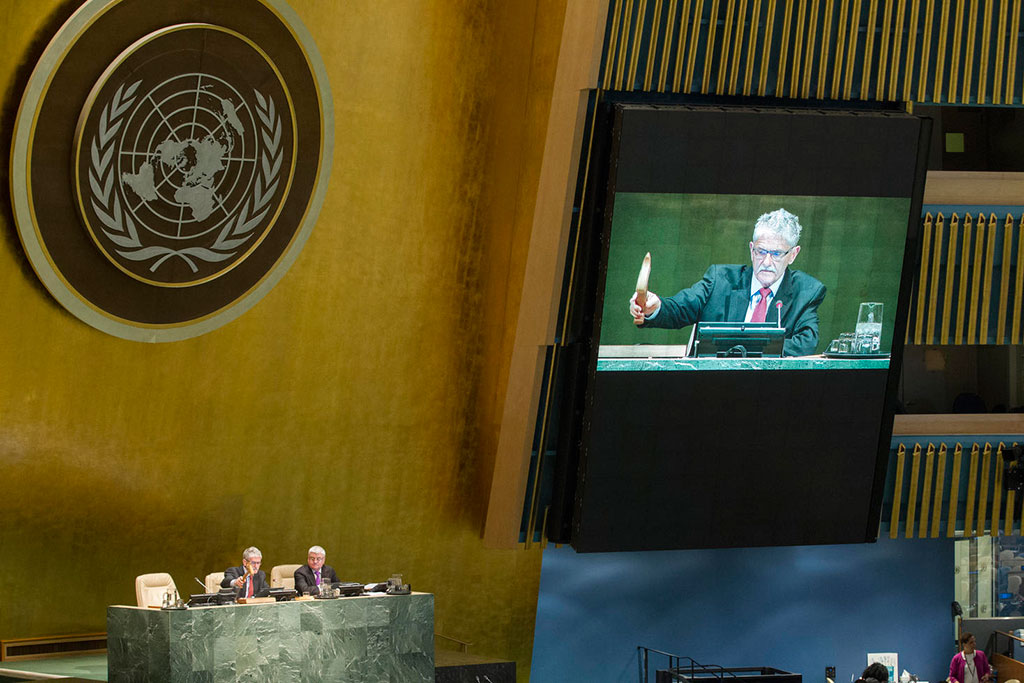 The General Assembly also adopted a substantively identical resolution on the same day, with the two resolutions providing renewed momentum for the focus on ‘sustaining peace’ within the UN system. Mogens Lykketoft (shown on screen), President of the seventieth session of the General Assembly, chairs the Assembly’s meeting. UN Photo/Loey Felipe

“Peacebuilding doesn’t happen in New York. It happens in the field. But New York can be a very important forum for discussions and a diplomatic platform that can help national and regional actors,” he added.

This is particularly vital for countries faced with cross-border dynamics, such as international organized crime, drug trafficking, or extremism.

The twin resolutions also charge the Secretary-General with reporting in 2017 on progress made in sustaining peace, making peacebuilding a high-priority item for the international community.

Among the countries on the Peacebuilding Commission’s agenda is Guinea-Bissau (the others are Burundi, Sierra Leone, Guinea, Liberia and Central African Republic) . One of the 20 poorest countries of the world, Guinea-Bissau emerged from a civil war in May 1999. It has since been trying to emerge from political turbulence, but was thrust back even in 2015, barely a year after the re-establishment of constitutional order.

What are the most frequent peacebuilding needs?

Support to basic safety and security, including mine action, protection of civilians, disarmament, demobilization and reintegration, strengthening the rule of law and initiation of security sector reform;Support to political processes, including electoral processes, and promoting inclusive dialogue and reconciliation;Support to the provision of basic services, such as water and sanitation, health and primary education, and support to the safe and sustainable return of refugees and internally displaced people;Support to restoring core government functions, particularly basic public administration and public finance;Support to economic revitalization, including creating jobs, particularly for youth and demobilized former combatants.

One of the main challenges in the country is weak institutions. The more than 80 islands of this West African country are largely isolated, which also make them a target for drug traffickers. The UN Office of Drug and Crime (UNODC) has said that billions of dollars’ worth of drugs were being shipping through West Africa starting in 2005.

The Peacebuilding Commission has been working in support of the Government to strengthen the rule of law and with regional bodies, such as the Economic Community of West African States (ECOWAS) and EU to curb trafficking.

“Today, no one country on its own can just manage some of its peacebuilding priorities and needs if it’s not working with its immediate neighbours and regional organizations,” Mr. Fernandez-Taranco said.

On 28 July, the Security Council will hold a ministerial-level debate on peacebuilding, presided over by Foreign Minister Fumio Kishida of Japan, which holds the rotating presidency of the Council for the month.

The focus will be on challenges related to peacebuilding in Africa, and specifically, on strengthening institution-building as a foundation for conflict prevention.

The UN News Centre will have coverage of the Security Council discussion.

Check back with us the week of 8 August as we continue our series on peacebuilding with a look at Mali and the Peacebuilding Fund, ahead of the pledging conference in September.

Closer collaboration between the United Nations Economic and Social Council (ECOSOC) and the UN Peacebuilding Commission is imperative in order to move forward on commitments in the sustainable development agenda and effectively address the specific challenges and needs of countries emerging from conflict, the President of ECOSOC said today.