The United Nations refugee agency today appealed to donors for an additional $115.4 million to fund the voluntary return and reintegration of Somali refugees from Kenya's Dadaab refugee camp.

In a press release, the Office of the UN High Commissioner for Refugees (UNHCR) said that funding is also required for the relocation of refugees from Dadaab to Kakuma refugee camp, as well as related projects and infrastructure in Kenya and Somalia.

“UNHCR is committed to ensuring that all returns to Somalia are voluntary and carried out in dignity, safety and with the protection of refugees paramount at all times,” said Valentin Tapsoba, Director of UNHCR's Africa Bureau.

“In order to do this, we are requesting the international donor community to support this additional appeal so that returning Somalis can go back to their home country with the best possible opportunities to re-establish themselves and their families in peace and stability,” he added.

UNHCR said it had previously appealed for $369.4 million for the “Somalia situation.” With this additional request, and with some reprioritization of projects, UNHCR's total revised 2016 requirements for the response in the affected countries of Djibouti, Ethiopia, Kenya and Somalia is now $484.8 million.

Following the Government of Kenya's announcement on 6 May of its decision to close Dadaab camp, UNHCR presented a plan of action at the meeting of the Tripartite Commission – consisting of Kenya, Somalia and UNHCR – which took place in Nairobi at the end of June.

UNHCR noted that the additional $115 million requested will go towards a number of activities, including relocation of 16,000 non-Somali refugees from Dadaab to Kakuma; relocation of 15,000 Somali refugees currently in the resettlement process to Kakuma; relocation and reintegration of an estimated 42,000 Kenyans believed to be registered as refugees; verification of the Dadaab population and a comprehensive Return Intention Survey; and support for an additional 50,000 voluntary Somali refugee returns from Dadaab to Somalia.

The additional funding is also required for the proposed increase in the return assistance package before departure from Kenya and upon return to Somalia, UNHCR noted. On the Somalia side, the agency said that donor support is sought to fund an increase in the return assistance package there. The possibility of providing health insurance for urban returnees will also be considered.

If the donor support is received, it is proposed to increase food assistance from three months support to six, possibly even further, UNHCR also said.

The agency anticipates that the majority of the remaining refugee population – approximately 170,000 people – would return to Somalia during the course of 2017 and possibly in early 2018. To date, more than 17,000 Somalis have returned to Somalia from Dadaab since December 2014. 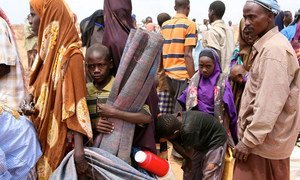 The United Nations refugee agency today expressed “profound concern” over the Government of Kenya's announcement this past week that it intends to end the hosting of refugees because of economic, security and environmental burdens, and called on the Government to reconsider its decision.