Following a request from the main international organization working to achieve a world free of chemical weapons, the United Nations Security Council today adopted a resolution authorizing the transfer of such weapons out of Libya for their safe, timely destruction.

By the text, the 15-member Council decided to “authorize Member States to acquire, control, transport, transfer and destroy chemical weapons […] to ensure the elimination of Libya's chemical weapons stockpile in the soonest and safest manner.”

The Council's action followed a decision on 20 July by the Executive Council of the Organisation for the Prohibition of Chemical Weapons (OPCW) that called for international assistance to help Libya's national unity government expedite the destruction of its remaining Category 2 chemical weapons “outside of Libya.”

Endorsing the OPCW Executive Council decision, the Council through its resolution encouraged Member States to “assist the Government of National Accord in providing support, including personnel, technical expertise, information, equipment, and financial and other resources […] to enable the OPCW to implement the elimination of Libya's Category 2 chemical weapons safely and in the soonest practicable timescale.”

Further, the Council requested regular reporting from OPCW Director-General on its activities in this matter until the destruction of the remaining chemical weapons is complete and verified.

“We will work with Libya and those countries able to provide support to ensure that this threat has been permanently eliminated,” he said.

Further on Libya, the Security Council welcomed recent efforts to take forward the implementation of the Libyan Political Agreement and underscored the importance of restoring the country's oil production to supply revenues to enable the Government of National Accord provide essential services for the benefit of its people.

In a press statement issued Friday, members of the Council welcomed the meeting of the Libyan Political Dialogue and the Presidency Council on 16 and 17 July, and the high-level roundtable on 18 and 19 July that discussed the implementation of the Agreement as well as providing basic services, resuming oil production and carrying out the security arrangements contained in the Agreement.

Stressing the importance of the continued inclusiveness of the Agreement, members of the Security Council “Called on all Libyans to unite in a spirit of reconciliation in implementing the Libyan Political Agreement and to refrain from any action that could undermine this important phase of Libya's democratic transition,” said the statement.

The members further reiterated their concern about terrorist threats in the country, in particular from groups proclaiming allegiance to Islamic State in Iraq and the Levant (ISIL/Da'esh) and groups affiliated with Al-Qaida. They welcomed recent progress in this regard and noted ongoing efforts in combating this threat.

The 15-member body also renewed the call made last year in resolution 2259 on UN Member States to cease support to and official contact with parallel institutions that claim to be the legitimate authority, but are outside of the Agreement as specified by it.

The Council also welcomed the role played by the UN Support Mission in Libya (UNSMIL) in the UN-facilitated, Libyan-led dialogue process and agreement, and reiterated their support for the Special Representative of the UN Secretary-General for the country, Martin Kobler. 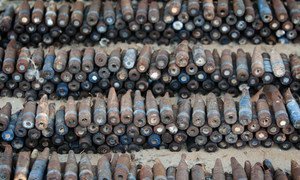