Dozens of people in South Sudan may have cholera, the United Nations children’s agency today announced, saying it is working with partners to step up its operations to avoid a possible cholera outbreak in the country.

“The Juba Teaching Hospital reported that 69 new suspected cases were admitted on Wednesday, bringing the total number of people being treated in the capital to 112,” the UN Children’s Fund (UNICEF) said in a press release .

An additional 29 suspected cases have been reported in Duk Island, Jonglei state, bring the total number of cases around the country to 141. However, the actual number of cases remains unconfirmed due to a critical lack of laboratory equipment needed for diagnosis.

“A fast and coordinated response is key to preventing a cholera outbreak,” said Mahimbo Mdoe, UNICEF’s Representative in South Sudan. “That’s underway, despite the fact that life in Juba was completely brought to a standstill for days by the recent violence and many humanitarian organizations have since evacuated staff.”

The UN agency is working with the Ministry of Health of South Sudan and partner organizations to provide medical supplies and sanitation, and raise community awareness.

With rapid response teams underway, UNICEF said it is providing its partners with drugs, infusions and other health products to treat disease, including triage tents in case the number of cases continues to rise.

At the UN protection of civilians sites where thousands continue to shelter following the fighting that erupted in Juba nearly two weeks ago, the UN Mission (UNMISS) and aprtners are continuing to supply daily water supplies. The water is then treated with chlorine. 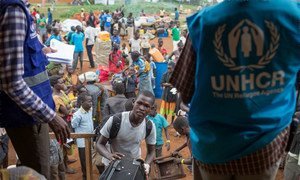 More than 5,000 people – primarily women and children under the age of 18 years – have fled from South Sudan to neighbouring Uganda since the latest violence in the country erupted on 7 July, according to the Office of the United Nations High Commissioner for Refugees (UNHCR).