On anniversary of Iran deal, UN calls for implementation of Joint Comprehensive Plan of Action

He noted also that lifting sanctions as a result of abiding with the JCPOA will “help to realize the long-awaited hopes and aspirations of the Iranian people to be reconnected to the global economy and the international community.”

The Council endorsed the JCPOA on 20 July 2015 in resolution 2231, calling it a “culmination of diplomatic efforts by the so-called E3+3 – which includes China, France, Germany, Russia, the United Kingdom and the United States – and Iran.

Presenting the Secretary-General's first report on implementation of the resolution, Mr. Feltman today told the Council that since 16 January of this year, the Secretary-General “has not received any report, nor is he aware of any open source information, regarding the supply, sale, transfer or export to Iran of nuclear-related items undertaken contrary to the provisions of the JCPOA.”

In addition, since that date, the Secretariat has received “no information regarding the supply, sale, transfer or export to Iran of ballistic missile-related items undertaken contrary to the provisions of resolution 2231 (2015).”

However, in early March 2016, during military exercises, Iran launched a series of ballistic missiles. The report includes details from Iranian media and from information provided to the Secretary-General from France, Germany, the United Kingdom and the United States.

“While it is for the Security Council to interpret its own resolutions,” Mr. Feltman said, “the Secretary-General stressed that we must maintain the momentum created by the conclusion of the Joint Comprehensive Plan of Action, consistent with its constructive spirit.”

“In this regard, he calls upon Iran to avoid such ballistic missile launches which have the potential to increase tensions in the region,” he continued.

The next report of the Secretary-General will be submitted to the Council in January 2017. 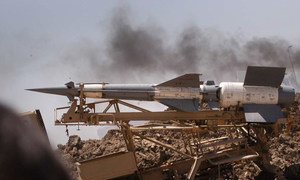 Following yesterday’s ballistic missile launch conducted by Iran, United Nations Secretary-General Ban Ki-moon today called on the Government “to act with moderation, caution and the good sense not to increase tensions through any hasty actions.”