FAO/Simon Maina
Agro-forestry farmers tend to their crops in Kigoma, Tanzania. Forests are an integral part of the national agriculture policy with the aim of protecting arable land from erosion and increasing agricultural production.
18 July 2016

Agriculture and forestry can improve food security, according to a new United Nations report released today, at the start of World Forest Week.

Farming is globally the most significant driver of deforestation, but promoting a more positive interaction between agriculture and forestry can build sustainable agricultural systems and improve food systems, according to the UN Food and Agriculture Organization (FAO).

“It is not necessary to cut down forests to produce more food,” said FAO Director-General José Graziano da Silva in his opening remarks to the 23rd session of the FAO Committee on Forestry, where he unveiled the latest The State of the World’s Forests (SOFO) report.According to the publication, large-scale commercial agriculture in the tropics and subtropics accounts for about 40 per cent of deforestation, subsistence agriculture for 33 percent, and the rest is due to urban growth, infrastructure and mining.

This occurs despite the fact that forests serve vital ecological functions and benefit agriculture and boost food production, the report highlights.

“Food security can be achieved through agricultural intensification and other measures such as social protection, rather than through expansion of agricultural areas at the expense of forests,” said Eva Müller, Director of the agency’s Forestry Policy and Resources Division.

She noted the need for better cross-sectoral coordination of policies on agriculture, forestry, food and land use, as well as effective legal frameworks and stronger involvement of local communities.

“Governments should provide local communities not only with secure land tenure but also with secure forest tenure rights. A farmer knows best how to manage his or her own resources but often lacks legal instruments to do so,” Ms. Müller added.

Since 1990, more than 20 countries succeeded in improving national levels of food security while at the same time maintaining or increasing forest cover, demonstrating that it is not necessary to cut down forests to produce more food, FAO said.

This was due to effective legal frameworks, secure land tenure, measures to regulate land-use change, policy incentives for sustainable agriculture and forestry, adequate funding, and clear definition of roles and responsibilities of governments and local communities.

In Viet Nam, for example, one of the seven countries detailed in the report, successful land reform has encouraged long-term investment, and helped to shift control of forests from the state to local community and partners.

The meeting of the Committee on Forestry coincides with World Forest Week – a series of meetings and events sponsored by FAO and partners. 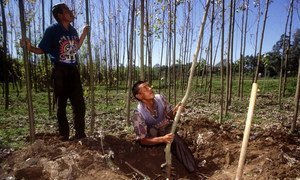 ‘Investing in forests is an insurance policy for the planet,’ says UN chief

On the International Day of Forests, United Nations Secretary-General Ban Ki-moon is calling on governments, businesses, civil society and other partners to adopt holistic policies and practices to protect, restore and sustain healthy forests for our common future.