UN Photo/Victoria Hazou
Two detainees behind the bars of the prison walls at the National Penitentiary of Haiti, 10 May 2012.
18 July 2016

A group of United Nations and other international human rights experts are calling for Governments to implement the Revised Standard Minimum Rules for the Treatment of Prisoners, dubbed the “Nelson Mandela Rules.”

“Their implementation in prisons around the world would significantly improve the treatment of millions of detainees,” said the UN Special Rapporteur on torture, Juan E. Méndez in an open statement along with Med Kaggwa, the Special Rapporteur on prisons, conditions of detention and policing in Africa; the Rapporteur on the rights of persons deprived of liberty of the Inter-American Commission on Human Rights, James Cavallaro; and the Council of Europe Commissioner for human rights, Nils Muižnieks.

The Rules are seen as the primary – and often the only – source of standards relating to the treatment of prisoners, and are part of a key framework to monitor and assess prisons.

In the statement, the international human rights experts call the revisions an “historic step and one of the most significant human rights achievements in recent years.”

Their applications would also aid prison staff to carry out “their important and difficult task in a professional and effective way, benefiting society at large,” according to the open statement.

The Standard Minimum Rules for the Treatment of Prisoners were adopted in 1957 and revised in 2015. The UN General Assembly "> unanimously adopted the revision on 17 December 2015, dubbing them the Nelson Mandela Rules in honour of the late President of South Africa, “who spent 27 years in prison in the course of his struggle for global human rights, equality, democracy and the promotion of a culture of peace.”

In the resolution, the Member States decided also to extend the scope of Nelson Mandela International Day, observed annually on 18 July, to be also utilized in order to promote humane conditions of imprisonment, to raise awareness about prisoners being a continuous part of society and to value the work of prison staff as a social service.

“The revised Rules are premised on the recognition of prisoners' inherent dignity and value as human beings,” said Mr. Méndez.

Also included – for the first time – is guidance on intrusive searches, including strip and body cavity searches, as well as recognition that independent healthcare professionals have a duty to refrain from participating in torture or other ill-treatment. 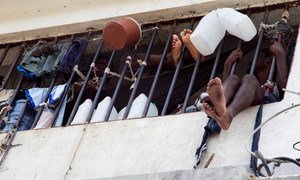 The United Nations today launched the Revised Standard Minimum Rules for the Treatment of Prisoners, dubbed the ‘Nelson Mandela Rules,’ which Secretary-General Ban Ki-moon welcomed as “a great step forward” but also drew attention to three areas that could be strengthened from a human rights perspective.