“These crimes are all the more despicable as they were carried out as residents were preparing for Eid al-Fitr celebrations to mark the end of the holy month of Ramadan,” the Secretary-General said in a statement issued today by his spokesperson's office.

Two security officers were wounded in the city of Jeddah shortly after midnight in Monday's first bombing attack, according to reports. The second attack took place outside a Shia mosque in the city of Qatif, while four security officers were reportedly killed and five others were injured in another attack near the Mosque of the Prophet in Medina.

Expressing his deepest sympathy and condolences to the families of the victims and to the Government and people of Saudi Arabia, the Secretary-General said he hoped that those responsible for the crimes will be identified and brought to justice.

“He stresses the need to intensify regional and international efforts to prevent and combat terrorism,” the statement said. Mr. Ban also wished a speedy recovery to those injured.

“This is one of the holiest sites in Islam, and for such an attack to take place there, during Ramadan, can be considered a direct attack on Muslims all across the world,” said Rupert Colville, spokesperson for the Office of the UN High Commissioner for Human Rights (OHCHR), in a press briefing note.

“The significance of this attack cannot simply be measured in terms of the four policemen who were reported to have been killed, and the physical damage. It is an attack on the religion itself,” the spokesperson added.

Later in the day, the UN Security Council also strongly deplored the “heinous and cowardly terrorist attacks […] which resulted in at least four people killed and five injured, for which ISIL (Islamic State in Iraq and the Levant/Da'esh) has claimed responsibility.”

In a press statement, the members of the Council expressed their deep sympathy and condolences to the families of the victims, to the people and Kingdom of Saudi Arabia, and wished speedy and full recovery to those who were injured.

The Security Council also stressed the need to take measures to prevent and suppress the financing of terrorism, terrorist organizations and individual terrorists, in accordance with its resolutions 2199 (2015) and 2253 (2015). 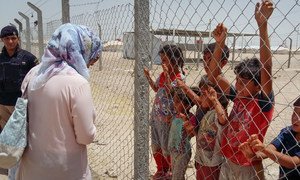 Despite hopes for calm during the holy month of Ramadan, hundreds killed in Iraq: UN

At least 662 Iraqis – half of them civilians – were killed and another 1,457 were injured in acts of terrorism, violence and armed conflict in the country in June, according to latest figures released by the United Nations political mission in Iraq.