“People escaping Fallujah are in desperate need of assistance now, this minute. We must act fast before this situation becomes a humanitarian catastrophe. These funds are time critical; however they only offer a small portion of what is urgently needed,” said Under-Secretary-General for Humanitarian Affairs and Emergency Relief Coordinator, Stephen O’Brien, in a statement issued by the UN Office for the Coordination of Humanitarian Affairs (OCHA).

“I call on donors to immediately support our humanitarian response and leverage this CERF allocation with additional resources so that together we can effectively address the growing humanitarian needs throughout Iraq,” he added.

Since this past month, more than 85,000 people have been forced to flee the city, displacing families from their homes, communities and livelihoods. Those remaining in the city face dire shortages of food, medicine, electricity and safe drinking water, OCHA said.

“The families who have managed to flee Fallujah have escaped with nothing: they need everything,” warned Lise Grande, Humanitarian Coordinator for Iraq.

“Humanitarian partners are working around the clock to provide shelter, water, health care, household kits and specialized support for the victims of gender and sexual-based violence. This CERF grant will allow us to rapidly scale up our efforts, so it could not be more timely,” she added.

Temperatures in the region are averaging 115 degrees Fahrenheit and rising. Many people are unable to access clean drinking water, and shade is limited, while already vulnerable communities are more susceptible to outbreaks of communicable diseases and there is a real risk of a cholera outbreak, OCHA said.

Response efforts will include improvements to hygiene and sanitation in order to help prevent the spread of disease.

OCHA indicated that the CERF funds will enable the UN humanitarian agencies in Iraq, including the International Organization for Migration (IOM), the UN Children’s Fund (UNICEF), the UN Population Fund (UNFPA), the Office of the UN Higher Commissioner for Refugees (UNHCR) and the World Health Organization (WHO), to quickly assist the newly displaced people.

OCHA is working with the Government of Iraq to quickly set up camps to provide additional shelters. Humanitarian partners will also focus on relief efforts to assist women and children who are particularly vulnerable in the conflict.

In addition, mobile psychological support teams are being established to provide specialized care for victims of the violence. The CERF funding will also enable health teams to provide critical care for newborn babies and children who have had limited health support and who have not yet been immunized.

The UN Humanitarian Response Plan in Iraq has called for $861 million to address the needs of people affected by the current crisis. To date, the appeal is only 36 per cent funded, OCHA said.

A further $65 million will be needed to respond to the current situation in Fallujah. This is expected to further strain already stretched resources and force humanitarian partners to reprioritize existing relief supplies and services, OCHA noted.

Contingency stocks are nearly depleted, which could leave other communities in the country potentially vulnerable. While agencies have been preparing for the Fallujah situation for some time, the number of displaced people and the scope of their needs have outpaced humanitarian capacity, OCHA emphasized.

In a humanitarian update released earlier today, OCHA reported that more than 83,000 people have fled the besieged city of Fallujah and surrounding areas as of this past Saturday, and thousands more could still be on the move amid ongoing fighting.

OCHA highlighted that since military operations led by Iraqi security forces to retake Fallujah in Anbar from the Islamic State of Iraq and the Levant (ISIL/Da’esh) began on 22 May, people have fled Fallujah in rapidly increasing numbers.

Most people initially fled outlying areas of Fallujah, but on 7 June, reports were received of some families leaving Fallujah city itself, as military operations began to enter the city centre. In the past few days, tens of thousands of people have been allowed to leave the centre of town, OCHA said.

“The sudden increase in displacement in early June follows both increased opportunities for families to flee as well as hundreds of other families demonstrating a willingness to take extremely high risks to try to escape, sometimes with grave consequences,” OCHA noted in the bulletin.

There are reports of people drowning as they tried to escape, or being injured or killed by snipers or improvised explosive devices. Many families are separated during their escape, with men and teenage boys being separated from their families for security screening, OCHA said.

The families still trapped inside Fallujah are thought to have only limited, if any, food, and there appear to be few sources of safe drinking water. The risk for disease outbreaks is high, OCHA noted.

While it is not clear how many civilians remain in the city, OCHA said that UN estimates indicate there could still be thousands of families.

“Nothing is more important than ensuring that civilians are protected and have access to life-saving assistance. The UN and partners continue to call on all parties to the conflict to do everything possible to meet their obligations under international humanitarian law,” OCHA said in the update.

Most displaced people from Fallujah have been taken to Ameriyat al Falluja, a town located about 30 kilometres south of the city, where the Government of Iraq and partners had previously prepared tents as well as water, sanitation and hygiene facilities.

These camps are now full, although the Government and humanitarian partners are working to quickly set up others, including in the nearby towns of Khalidiyah and Habbaniyah Tourist City, OCHA said.

People are also fleeing areas north of Fallujah towards the east, and are being hosted in local schools and in the Al Ahal camp.

OCHA said that major efforts are being made to provide emergency assistance to the newly displaced, including shelter, water, food, basic household items and health care. Specialized activities for children and women are being established and mobile teams are providing psychological support.

The UN has not been able to access Fallujah since it came under the control of armed opposition groups in January 2014. Humanitarian partners have worked with about 50,000 civilians remaining in Fallujah, although OCHA stressed that the number of displaced people is well above that planning figure and that the scope of the crisis has outpaced humanitarian capacity.

“Contingency stocks are nearly depleted, every agency requires funds and there are few frontline partners,” OCHA stressed. “With rising temperatures and lack of shade and clean drinking water, outbreaks of communicable diseases are likely.”

OCHA also emphasized that there is only limited support for newborn babies, and nearly all of the children who have been outside Government control have not yet been immunized. The low level of antigens, coupled with poor hygiene and substandard sanitation, raises the risk of disease outbreaks further.

Prior to the most recent military operation, more than 75,000 displaced people from other locations within Anbar were already residing in camps near Fallujah in Khalidiyah, Habbaniyah and Ameriyat al Falluja.

Humanitarian partners also continue to provide emergency assistance to other conflict-affected people, including in the transit sites Al Wafaa and Kilo 18 in western Anbar, OCHA said.

On first anniversary of Mali peace accord, Ban welcomes President's commitment to peace 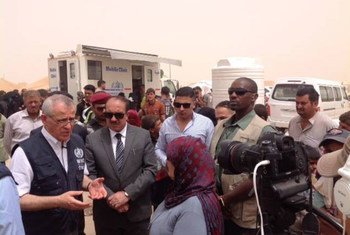 16 June 2016
The low level of immunity coupled with poor hygiene conditions raises the risk of disease outbreaks, such as measles, in the Iraqi city of Fallujah, where more than 42,000 people have been displaced since the beginning of military operations in May.