Meeting today with Faustin Archange Touadéra, President of the Central African Republic (CAR), United Nations Secretary-General Ban Ki-moon noted that the country had turned a corner following the holding of democratic elections, and welcomed the leader's resolve to fully address the root causes of the country's crisis in an inclusive spirit.

According to a statement issued by his spokesperson, Mr. Ban met in New York today with President Touadéra to discuss the situation in the CAR, including the President's dialogue with representatives of the armed groups.

“[The Secretary-General] welcomed the President's outreach to the armed groups and his vision for a comprehensive process to address the underlying reasons that had driven them to take up arms,” said that statement, adding that the UN chief also welcomed the resolve of the President and his Government to pursue this process in a spirit of national reconciliation and inclusiveness, guided by the principles and recommendations of the Bangui Forum.

The Forum, held in the CAR capital from 4 to 11 May 2015, covered reconciliation, and the inclusive grassroots level consultations that gathered views of local citizens in advance.

Further to today's statement, Mr. Ban urged the armed groups to seize the opportunity afforded by the President's initiative to bring peace and stability to the country by engaging in it in good faith. He stressed that the early restoration of State authority was critical for security and the country's socio-economic recovery.

The Secretary-General also emphasized the importance of the international community's support for the CAR's efforts to tackle the root causes of the crisis and its backing for the country's recovery plan, the statement said, adding that Mr. Ban also reaffirmed the commitment of the UN and its mission in the country, known by the French acronym MINUSCA, to lend its full support to the peace process. 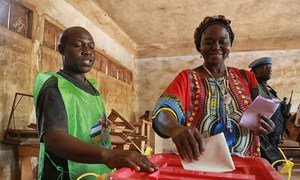 The top United Nations official in the Central African Republic (CAR) met this week with the new National Assembly, which took office after a series of successful elections supported by UN peacekeepers in the country.