According to the UN Assistance Mission in Afghanistan (UNAMA), the attack killed at least three civilians and injured more than 70 others – including 31 boys – with at least two in critical condition. An improvised explosive device planted at the mosque detonated, killing a mullah, one man, and one boy as they prayed on the first Friday of the Holy Month of Ramadan.

“An attack deliberately targeting civilian members of a community praying together in a mosque can never be justified and highlights the perpetrators' intent to destroy lives, and spread terror among the civilian population,” Nicholas Haysom, the Secretary-General's Special Representative for Afghanistan and head of UNAMA, said in a statement.

“International humanitarian law prohibits the deliberate targeting of civilians, including at their places of worship, and imposes a specific obligation on combatant parties to allow religious personnel to carry out their work. At face value, this attack a war crime and the perpetrators must be held accountable,” he stressed.

On behalf of the United Nations in Afghanistan, Mr. Haysom expressed deep condolences to the families of the victims and wished a speedy recovery for the injured. 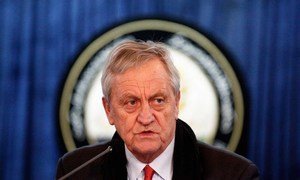 The United Nations Assistance Mission in Afghanistan (UNAMA) has condemned today's attack in Pul-e-Alam town of Logar Province in which seven civilians were killed and more than 20 injured.