UNHCR/Cengiz Yar
A displaced family from Mosul living at Baharka Camp on the outskirts of Erbil, Iraq.
10 June 2016

More than half a million people remain uprooted from their homes two years after fleeing violence in the Iraqi city of Mosul, while military activities in the north and south-east of the city are causing fresh displacement, the United Nations refugee agency said today.

At the regular bi-weekly news briefing in Geneva earlier today, William Spindler, spokesperson for the Office of the UN High Commissioner for Refugees (UNHCR), said that more than 14,000 displaced Iraqis have been registered in camps north and south-east of Mosul – Iraq's second-largest city – and across the border in Syria, since the Iraqi Security Forces began a new military offensive in late March.

“Many of those who had fled the city two years earlier have had to move several times in search for safety and a decent place to live,” Mr. Spindler said, adding that most faced economic hardship.

He noted that a recent survey has found that unemployment is the greatest problem faced by families uprooted from their homes and scattered across Iraq, a country where more than 3.3 million people – around 10 per cent of the population – have been displaced due to conflict since the start of 2014.

The spokesperson also said that 82 per cent of families from Mosul reported not having enough income to cover their basic needs. Such pressure has led to other problems and coping strategies, including high levels of child marriage, which is twice as prevalent among displaced people from Mosul compared with those from other parts of the country, according to the recent survey.

Of the half a million people who had fled combat in Mosul two years earlier, more than 300,000 have found shelter in Dohuk Governorate of the Kurdistan region of Iraq, while others are scattered across the country, Mr. Spindler said.

Local authorities in Iraq estimate that an additional 30,000 people could be displaced from the area in the coming months, he added.

Asked how the displaced people in northern Iraq are receiving assistance and coping, Mr. Spindler said that their situation is precarious, and many of them are staying in camps for internally displaced persons. Others are just remaining at ad hoc locations, such as abandoned buildings. 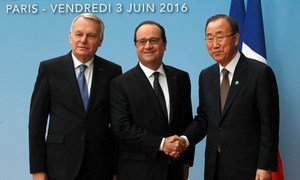 In Paris, Ban calls for ‘courage and legitimacy’ to achieve peace in Middle East

Terror, violence and the incitement that fuel them, along with the ongoing settlement enterprise and the lack of unity between Gaza and the West Bank are all obstacles that must be overcome on the path towards achieving peace in the Middle East, United Nations Secretary-General Ban Ki-moon stressed today, calling on the international community to exercise its influence to help reach this goal.