Content of report on conflict-affected children 'will not change,' asserts Ban

Standing by his decision to remove the Saudi-led Coalition in Yemen from his latest report on conflict-affected children, United Nations Secretary-General Ban Ki-moon today said it was one of the most “painful and difficult decisions” he has ever had to make, and that it is “unacceptable” for Member States to exert undue pressure as scrutiny is necessary part of the work of the UN.

Standing by his decision to remove the Saudi-led Coalition in Yemen from his latest report on conflict-affected children, United Nations Secretary-General Ban Ki-moon today said it was one of the most 'painful and difficult decisions' he has ever had to make, and that it is 'unacceptable' for Member States to exert undue pressure as scrutiny is necessary part of the work of the UN.

“The report describes horrors no child should have to face,” said Mr. Ban speaking to the press outside of the UN Security Council chamber, where he acknowledged the “fierce reaction to my decision to temporarily remove the Saudi-led Coalition countries from the report's annex.”

“At the same time, I also had to consider the very real prospect that millions of other children would suffer grievously if, as was suggested to me, countries would de-fund many UN programmes. Children already at risk in Palestine, South Sudan, Syria, Yemen and so many other places would fall further into despair,” he stressed.

Insisting that he stands by the report, the UN chief added that the Organization “will assess the complaints that have been made, but the content will not change.”

“I fully understand the criticism, but I would also like to make a larger point that speaks to many political challenges we face. When UN peacekeepers come under physical attack, they deserve strong backing by the Security Council,” he stated. “When UN personnel are declared persona non grata simply for carrying out their jobs, they should be able to count on firm support from the Member States,” he said.

Mr. Ban also underlined that when a UN report comes “under fire” for raising difficult issues or documenting violations of law or human rights, Member States should defend the mechanisms and mandates that they themselves have established.

“As the Secretariat carries forward the work that is entrusted to us, I count on Member States to work constructively and maintain their commitment to the cause of this Organization,” he told reporters.

Turning to the issue of migration, the Secretary-General announced that he will be traveling to the Greek island of Lesbos next week to assess the situation and to show his solidarity.

On 26 January 2016, refugees and migrants wait to enter the Miratovac Refugee Aid Point in southern Serbia, on the border with the former Yugoslav Republic of Macedonia, after crossing the Mediterranean. Photo: UNICEF/Emil Vas

“Hundreds of Syrians and other refugees and migrants continue to die in the Mediterranean while making perilous journeys out of war and persecution,” he said. “I have listened to the stories, hopes and fears of many refugees in recent months, to understand this challenge based on their first-hand experience,” he added.

As the global community formulates a global response to adopt at the upcoming High-Level Meeting on large-scale movements of refugees and migrants in September, Mr. Ban said he looks forward to continuing to work with Member States “to meet this test of our common humanity.”

The Secretary-General also took the opportunity at the press encounter to highlight some other challenges affecting the “wide sweep” of the UN's work, such as keeping up momentum on the 2030 Agenda and the Paris Agreement; building on the progress of last month's World Humanitarian Summit; and doing more to resolve major threats to international peace and security.

Responding to questions, Mr. Ban told one correspondent that in the course of making reports available to the Member States or in the course of preparing these reports, the Organization has found that some countries were more concerned that their names are listed together with some non-State actors, like terrorist and extremist groups.

“Therefore, I think the main reaction of the Coalition is also that their names are included and listed together with some terrorist and extremist groups. Therefore, we are now in the process of considering what would be the better modalities of listing those countries,” he explained, but reiterated that no decision has been made as the matter is still being discussed.

As crises multiply, UN revises annual aid appeal to assist over 100 million around the world 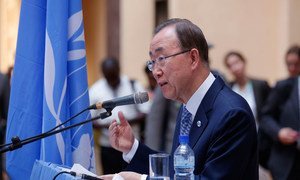 In the wake of the release of his latest report on the situation of 'Children in Armed Conflict,' United Nations Secretary-General Ban Ki-moon has accepted a proposal by Saudi Arabia that the United Nations and the Saudi-led Coalition in Yemen review jointly the cases and numbers cited in the text.