The threat posed by ISIL (Da'esh) and its associates remains high and continues to diversify, the top United Nations political official today told the Security Council warning of an increased risk of a major international attack.

Under-Secretary-General for Political Affairs, Jeffrey Feltman told the Council that while military setbacks in Iraq and Syria account for an increased in the rate of returnee foreign terrorist fighters, “ISIL is yet to be strategically or irreversibly weakened.”

He also warned of an inflow of arms and ammunition directly or indirectly into ISIL-held territory.

“Given its recent military setbacks, ISIL may be moving into a new phase, elevating the role of its affiliates; trying to move funds outside the current zones of conflict; and increasing the risk of complex, multi-wave and international attacks,” Mr. Feltman cautioned.

These observations are part of the second “Report of the Secretary-General on the threat posed by ISIL (Da'esh) to international peace and security and the range of United Nations efforts in support of Member States in countering the threat” released on 31 May 2016.

Below are some of the main observations of the report, compiled by the UN Department of Political Affairs' Politically Speaking.

The Gravity of the Threat

The report observes that ISIL's territorial expansion in Iraq and Syria has been halted, and in part reversed, over recent months. For the first time since the declaration of its so-called “Caliphate” in June 2014, the ISIL core is under financial pressure.

But many Member States have noted that ISIL is not yet strategically and irreversibly weakened. Several Member States report a marked increase in the rate of returnees from Iraq and the Syria. Information received from Member States points to recent discussions inside the core ISIL leadership concerning the group's future strategy, a development that should be further monitored.

Recent international attacks perpetrated by members of ISIL demonstrate that the terrorist group is now moving into a new phase, with the increased risk that well-prepared and centrally directed attacks on international civilian targets may become a more frequent occurrence. The attacks in Paris in November 2015 and in Brussels in March 2016 demonstrate the ability of ISIL to mount complex, multi-wave attacks. National law enforcement agencies continue to investigate those attacks, but it is already clear that they were coordinated by foreign terrorist fighters who had returned to Europe from ISIL-held territory in Syria.

Continuing pressure on ISIL in Iraq and Syria increases the likelihood that the terrorist group may try to move funds to affiliates outside the immediate current conflict zone. Initial reports received from Member States indicate that this may already be occurring.

The United Nations Assistance Mission for Iraq (UNAMI) reports that, because ISIL has not conquered new territory in Iraq for some time, its ability to loot and sell fresh resources, assets or antiquities has been diminished.

Increased pressure on ISIL finances in Syria and Iraq also means an increased risk that ISIL will attempt to exploit additional revenue-generating activities. The international community must therefore remain alert to attempts by ISIL to further diversify its revenue streams or expand relatively minor streams.

Significant numbers of foreign terrorist fighters continue to travel from States around the world to join ISIL in Iraq and the Syrian Arab Republic. One Member State reported that around 38,000 individuals may have attempted to travel to the region in the past few years.

After 18 months of presence in Libya, the local branch of ISIL continues to be part of a deliberate strategy on the part of the ISIL core to expand outside Iraq and Syria. Although the total number of foreign terrorist fighters in Libya is significantly lower than that in Iraq and Syria, Member States estimate the ISIL fighting force (which is mainly composed of foreign terrorist fighters) to comprise between 3,000 and 5,000 fighters.

In Afghanistan, in the face of opposition, ISIL has tactically retreated from the main settled areas to the mountainous periphery alongside the Afghanistan-Pakistan border. In autumn 2015, ISIL was estimated to have between 1,400 and 2,000 fighters in Nangarhar Province. By the first quarter of 2016, however, this force was estimated to consist of fewer than 1,000 fighters. Still, ISIL in Afghanistan has proved its ability to hold limited terrain and to conduct terrorist attacks in major cities beyond its core territory.

ICT is a key enabler for ISIL and plays an essential role in enabling ISIL and its affiliates to function, recruit and attack. ISIL may currently lack technical capabilities for cyberattacks against critical infrastructures. However, the risk that ISIL will purchase attack tools from the “darknet” is real and developing. Many leading ICT companies have measures in place to prevent the abuse of their platforms. Google and Facebook recently announced the launch of anti-radicalization campaigns to be conducted together with civil society organizations.

Sexual violence continues to be used as a tactic of terrorism to increase the power, revenue and recruitment base of ISIL, as well as to shred the social fabric of targeted communities. The trafficking of women and girls remains a critical component of the financial flows to ISIL and its affiliates, which continue to exploit ICT to extort funds through the trafficking and sale of women.

Currently, only around one third of the 77 Member States (S/2015/975) identified as “most affected” by the threat posed by foreign terrorist fighters have updated their legislation in response to resolution 2178 (2014). In many Member States, existing legislation falls short in several areas, including the need to prevent the travel of such fighters by comprehensively criminalizing preparatory or accessory acts. 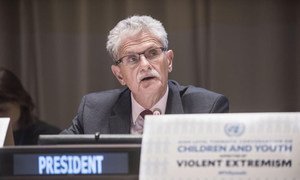 Children and youth are often the most vulnerable victims of the scourge of radicalization and violence, the President of the United Nations General Assembly emphasized today, urging the international community to advance its own thinking and refine its responses to addressing the challenges of violent extremism.