UNICEF/Santiago Arcos
Destroyed houses in the Santa Rosa neighborhood, the area most affected by the earthquake in Muisne, Esmeraldas, Ecuador.
7 June 2016

The risk that natural disasters will affect more people in the Americas is increasing as urban centres across the continent continue to experience rapid growth, the head of the United Nations Office for Disaster Risk Reduction (UNISDR) for the region has said ahead of a key meeting in Paraguay on the issue.

Some 93 major disasters were recorded in the Americas last year second only to Asia as the most disaster-prone region in the world. They include an earthquake in north-western Ecuador in April, which killed more than 650 people, and flooding in Paraguayan capital Asunción.

“This region has been growing quite rapidly both in terms of population and but also economically, and now 80 per cent of the population lives in cities,” said Ricardo Mena, the head of the Americas office of the UN Office for Disaster Risk Reduction (UNISDR).

“In some instances, this rapid growth has been unplanned,” he added, “and has led to many people living in areas which are quite exposed to natural hazards.”

Responding to and mitigating these natural disasters is due to be the focus of discussions between more than 170 ministers and delegates from 35 countries in the Americas who are gathering in Asunción, Paraguay, on Wednesday for the High-Level Ministerial meeting on the Implementation of the Sendai Framework 2015-2030 in the Americas.

They will look at how best to promote the Sendai Framework, which was adopted in the Japanese city of the same name in March 2015, an internationally agreed strategy to reduce the number of people who die in or who are otherwise affected by disasters. It focuses both on natural and man-made disasters and aims to substantially reduce losses in lives, livelihoods and damage to the environment.

The gathering will be timely in the wake of a series of natural disasters in the region. The 7.8 magnitude earthquake in Ecuador destroyed thousands of houses as well as infrastructure and forced 73,000 people to find emergency shelter provoking a huge international humanitarian response.

Earthquakes are just one of the hazards in this natural catastrophe-prone region; hurricanes, volcanic activity, flooding and drought have all taken their toll on human life in recent years.

The UN Food and Agricultural Organization (FAO) has reported that 3.5 million people are struggling to feed themselves in Guatemala, El Salvador and Honduras as a result of drought fuelled by the El Niño weather phenomenon and staple food production has dropped to its lowest level in 12 years in Haiti, as prices have skyrocketed.

The region is also dealing with a major public health emergency as the mosquito-borne Zika virus continues to spread. An active hurricane season has been forecast in the Atlantic Ocean bringing fears of more destruction.

The meeting is due to be opened by the President of Paraguay, Horacio Cartes Jara, and will be attended by the Special Representative for Disaster Risk Reduction and head of UNISDR, Robert Glasser.

“This is a very important gathering for the Americas,” Mr. Glasser said. “It is the first opportunity for the region to discuss how to implement the Sendai Framework and a sign of the region’s commitment to strengthening disaster risk governance.”

The main objective will be the development of guidelines for a regional action plan that will encourage countries and communities to reduce disaster risk and the attendant potential losses.

The plan, which will be known as the Declaration of Asunción, will to be developed between June and the holding of the Americas Regional Platform for Disaster Risk Reduction in March 2017, where it is expected to be approved. 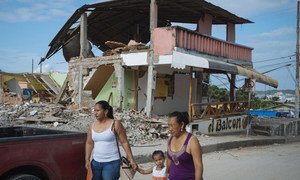 Ecuador: month after quake, humanitarian needs acute; many without roof over heads – UN

One month after the 7.8-magnitude earthquake that claimed the lives of over 650 people in north-western Ecuador, humanitarian needs remain acute there, as 73,000 people have been displaced, 15,000 people have lost their identity documents, and 17,000 refugees and asylum-seekers, mostly from Colombia, who lived in the stricken areas were also affected, the United Nations refugee agency said today.