Germany, the United Kingdom and the Netherlands are the most transparent top and major small arms exporters, a new report backed by the United Nations has found.

At a press conference on the launch of the survey, Olivier Marc Zehnder, Deputy Permanent Representative of Switzerland to the UN, highlighted that the “arms trade treaty and its reporting obligations play a crucial role in promoting responsible arms transfers,” and stressed that “universal ratification remains vital and reporting obligations must be fulfilled by State parties.”

The report provides an overview of the international trade in small arms and light weapons in 2013, identifies the world’s top and major exporters of small arms and light weapons, and assesses changes in trade patterns from 2012 to 2013. The update also presents the 2016 edition of the Small Arms Trade Transparency Barometer, which scores key exporters from the most to the least transparent.

Among the report’s main findings include that data reported to UN Comtrade – a repository of official trade statistics and relevant analytical tables – reveals international transfers of small arms by top and major actors worth an estimated $5.8 billion in 2013, a 17 per cent increase compared with 2012.

The report found that in 2013, the top exporters of small arms and light weapons – those with annual exports of at least $100 million – were, in descending order, the United States, Italy, Germany, Brazil, Austria, South Korea, Turkey, the Russian Federation, the Czech Republic, Israel, Belgium, Croatia, China, Switzerland, Japan and Spain.

The survey’s analysis of trade data going back to 2001 reveals that 2013 witnessed the largest number of top exporters, with Croatia surpassing the $100 million mark for the first time.

In 2013, the eight top importers of small arms and light weapons – those with annual imports of at least $100 million – were, in descending order, the United States, Canada, Germany, the United Arab Emirates, Saudi Arabia, Australia, France and Norway.

The United States imported more than $2.4 billion of small arms, maintaining its record high since 2001.

Also speaking at the report’s launch was Nicolas Florquin, the survey’s research coordinator, who indicated that the United States, Germany and Italy represent “almost 40 per cent of all recorded exports in 2013.”

In addition, he noted that “imports by top importers increased markedly by 23 per cent between 2012 and 2013.”

“One of the key findings in the report is that trade with the Middle East increased markedly in 2013. Imports by major importers in the region nearly doubled between 2012 and 2013,” he said.

The average score in the 2016 Transparency Barometer, which scores key exporters from the most to the least transparent, was 11.16 out of 25 available points, representing less than 50 per cent of a perfect score.

The survey concluded that once again in this year’s barometer, information on export licences granted and refused remains especially scarce. Of the countries under review, about one half provided no information on approved licences, while almost two thirds did not report on the ones they denied.

More than one third of the countries under review improved their scores since the last edition of the barometer. Among these, South Africa experienced the largest increase (+7.75 points), followed by Bosnia and Herzegovina, which had an increase of 4.25 points.

The report’s launch today was hosted by the Permanent Mission of Switzerland to the UN, and took place during the Sixth Biennial Meeting of States to consider implementation of the UN Programme of Action to Prevent, Combat and Eradicate the Illicit Trade in Small Arms and Light Weapons in All Its Aspects.

2005 is year for action on new global collective security – Annan 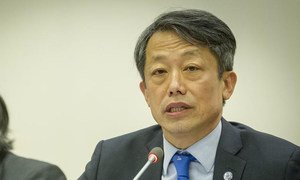 Despite a “deepening paralysis and divisions within multilateral disarmament bodies,” and the fact that many are looking outside traditional United Nations forums for progress, the top official on the issue stressed today that the UN Disarmament Commission has considerable potential to demonstrate that the existing disarmament machinery can produce results.