Ahead of a major United Nations conference on priorities for the world’s least development countries (LDCs), Secretary-General Ban Ki-moon has announced the appointment of members to a governing council that will provide support towards the operationalization of a proposed Technology Bank for those vulnerable nations.

In a note to correspondents issued today by Mr. Ban’s spokesperson highlighted that a dedicated trust fund has also been set up to support the preparatory phase of the Technology Bank in the lead-up to its establishment by the General Assembly.

The trust fund is open to contributions from Member States and other stakeholders, including the private sector and foundations.

This announcement comes hours before the opening in Antalya, Turkey, of the three-day Midterm Review of the 2011Istanbul Programme of Action (IPoA), which set out a vision and strategy for the sustainable development of LDCs through 2020.

The Secretary-General established a High-Level Panel in November 2014 to study the scope and functions of a proposed new Technology Bank and dedicated to helping LDCs advance out of poverty.

For its part, the Governing Council will “formulate principles and policies governing the activities and operations of the mechanism, including preparing its Charter for consideration and adoption by the General Assembly,” the note said.

The Governing Council will be chaired by Mohamed H.A. Hassan (Sudan), President of the InterAcademy Partnership and former Chairman of the Council of the UN University.

Abdoulaye Yero Balde, Minister of Higher Education and Scientific Research of Guinea and Professor Zakri Abdul Hamid, Science Adviser to the Prime Minister of Malaysia and member of the Secretary-General’s Scientific Advisory Board, will also form part of the governing council.

Other members of the Governing Council are listed here.

The Istanbul action plan called for the establishment of a Technology Bank and a Science, Technology and Innovation Supporting Mechanism dedicated to least developed countries.

“This has been a long-standing priority of the LDCs confirmed in the 2015 Addis Ababa Action Agenda and in Sustainable Development Goal 17,” the spokesperson’s note said.

The Government of Turkey has offered to host the Technology Bank in Gebze, Turkey.

♦ Receive daily updates directly in your inbox - Subscribe here to a topic.
♦ Download the UN News app for your iOS or Android devices.
technology|And

LDCs: Behind the scenes – gearing up for a UN conference on least developed countries

LDCs: UN conference on least developed countries opens in Turkey to assess progress made since 2011 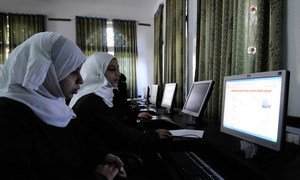 The world’s poorest nations are one step closer to gaining access to critical science, technology and innovation (STI) that is vital to their sustainable development, poverty eradication, and changing the lives of millions of people who live in some of the poorest segments of the global community, the United Nations has announced.