“We are all here because global humanitarian action is unprecedentedly strained,” Mr. Ban told thousands of participants attending the opening ceremony, which featured creative performances and inspiring words by renowned stars including Forest Whitaker, Ashley Judd and Daniel Craig.

“I proposed this Summit four years ago out of concern for rising humanitarian needs and declining political will. Today, the urgency has only grown,” the Secretary-General stressed.

As part of a moving spectacle that emulated dust storms and earthquakes, and projected images of authentic footage inspired by personal human stories, Malian singer Inna Modja kicked off the historic Summit with a soulful poem.

The United Nations estimates that a record number of people – 130 million – currently need aid to survive. More people have been forced from their homes than at any time since the end of the Second World War.

“This is a 21st century United Nations gathering,” the Mr. Ban said describing the Summit, adding that its Agenda for Humanity, the document he recently issued to guide discussions and action, is based on three years of consultations with 23,000 people in more than 150 countries.

Over the next two days in the Turkish capital, WHS is bringing together stakeholders who have a vested interest in improving the global humanitarian system, including more than 65 Heads of State and Government as well as leaders from the public and private sectors.

The UN chief underlined that the world is looking to them for commitments to five core responsibilities:

“We are here to shape a different future,” Mr. Ban concluded. “Today we declare: We are one humanity, with a shared responsibility.”

In his remarks to the opening ceremony, UN General Assembly president Mogens Lykketoft said that expectations high for Summit. “People around the world are demanding that we move beyond fine words; that we build on the generosity we already see; and live up to our core responsibilities,” he said.

“Now is the time to end the conflicts at the root of the current crisis; to ensure adherence to international humanitarian law and accountability for violations; to make the humanitarian system more efficient and more effective; [and] to stand up for those we are leaving behind,” the Assembly president said, also underscoring the need to secure the extra $15 billion required to meet humanitarian needs – just one cent out of every $50 of today’s global economy.

Meanwhile, Turkish President Recep Tayyip Erdogan expressed hope that the Summit would lead to “auspicious outcomes” for hundreds of millions of people struggling to sustain their lives under great distress.

“Pain knows no colour, race, language or religion,” Mr. Erdogan said, noting that it was with that in mind that Turkey carried out its aid and development projects in more than 140 countries around the world, hosting more than three million refugees from Syria and Iraq.

“We will never close our doors or our borders to people,” he insisted. “We as leaders and responsible individuals of the international community can only succeed if we work under common principles and goals.”

The President also stressed that Turkey would not stop pursuing “blood-shedding dictators” and will ensure that crimes against humanity do not go unpunished.

Prior to these remarks, survivors of humanitarian catastrophes—both human-made and natural—spoke to the audience in emotional addresses, recounting their ordeals and how they overcame them with the desire to now support others.

Victor Ochen, a former child solider from northern Uganda, spoke about growing up with violence everywhere around him. At the age of 13, he chose a different path, forming a peace club in his refugee camp to discourage children and young people from joining the armed forces. “Peace comes from within,” he said. “Be human and act human.”

Victoria Arnaiz-Lanting described her experience surviving Typhoon Haiyan which hit the Philippines in 2013, saying that it was a miracle she survived. She lost many friends and colleagues in the storm, dead bodies filled the streets, and trees and electric posts fell to the ground like match sticks. The typhoon also made thousands of people internally displaced, who, driven by hunger and grief, looted the supermarkets.

And yet, she expressed how unbelievable it was to see how quickly people started to rebuild their lives. The Philippines Red Cross and victims themselves began treating the wounded and liaising with the Government and other humanitarian actors.

“This is humanity in action,” she said, noting that disasters affected more than 200 million people a year and that preparedness must become a way of life. She encouraged every nation, large and small, to invest in local actors.

Speaking of the Syrian conflict, Adeeb Ateeq said war has inflicted much suffering on the people. Mines have blown apart men, women, and children, with many afraid to seek medical care for fear of encountering other unexploded ordnance.

“I have decided to harness my experience of demining to end the loss of life,” he said, describing a volunteer team he has established to educated young people about the lethal nature of unexploded land mines.

Recalling his own experience of losing a leg after encountering an unexploded device, Mr. Ateeq explained how he had been bound to a wheelchair until being fitted with an artificial limb; this led him to try to help others.

“My goal is to save the lives of innocent civilians,” he said, calling on all to provide assistance in that quest and in safeguarding humanity.

♦ Receive daily updates directly in your inbox - Subscribe here to a topic.
♦ Download the UN News app for your iOS or Android devices.
WHS|the 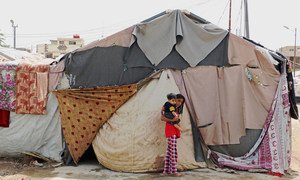