UNICEF/Tomislav Georgiev
Children outside refugee tents on 8 March 2016, in Idomeni, Greece.
20 May 2016

“Refugee children, like children everywhere, have the right to education. It is fundamental that children who have been uprooted by war and violence are not left behind even further,” stressed Filippo Grandi, the UN High Commissioner for Refugees (UNHCR), in a press release issued by his Office. “We urge donors and development organizations to support efforts to include refugee children and youth in national education systems,” he added.

The No More Excuses paper was jointly released by UNHCR and the UN Educational, Scientific and Cultural Organization (UNESCO) Global Education Monitoring Report ahead of the World Humanitarian Summit in Istanbul, Turkey, which is set to start on 23 May.

The paper calls for countries and their humanitarian and development partners to urgently ensure that children and adolescents who are forcibly displaced are included in national education plans, and to collect better data to monitor their education status and progress.

“There are unprecedented numbers of forcibly displaced populations, putting huge pressure on education systems. But for these children and youth education is especially important: by simply being in school, they are better protected from trafficking, illegal adoption, child marriage, sexual exploitation and forced labour,” said Irina Bokova, Director-General of UNESCO.

Specifically, the paper reveals that behind the global average number of refugee children out of school, there are significant differences among countries. Primary enrolment rates average 80 per cent in selected refugee sites in Egypt, Iran and Yemen, but only 40 per cent in Pakistan and 50 per cent in Ethiopia.

Access to secondary education is even more limited for refugees in many countries. In Bangladesh, Kenya and Pakistan, less than 5 per cent of adolescents 12 to 17 years old were enrolled in secondary education. Enrolment in early childhood education also remains very limited in some countries, reaching only 7 per cent in Turkey in 2015, according to the policy paper.

“What little we know is mostly about those living in camps, yet more than half of the world's refugees reside in urban areas, where even less is known. We need to know who they are, what they've been through and whether we're effectively responding to their needs,” he said.

Based on available data concerning displaced persons outside refugee camps, the paper shows that only 53 per cent of school-age Syrian refugees in Jordan and 30 per cent in Turkey are enrolled in school.

The agencies noted that reliable data on internally displaced people are even more limited, but reports indicate that their displacement is putting huge strains on already weak education systems.

In Nigeria, for instance, children displaced because of attacks by Boko Haram did not have access to any form of education in 19 out of 42 camps, according to data from June 2015. In Iraq, only 32 per cent of internally displaced children and adolescents in 2015 had access to any form of education. In Yemen, only one third of school-age internally displaced children in Lahj governorate were enrolled in school.

Those already marginalized, notably girls, are often the worst affected among refugees, the report found. In Kakuma Camp in Kenya, in 2015, only 38 per cent of primary school students were girls. In Pakistan, where child marriage and teenage pregnancy are often cited among refugee girls, dropout rates for refugee girls were as high as 90 per cent.

The paper advocates for four main policy directions for governments and their partners to tackle the diverse neglected needs of internally displaced persons and refugees: enshrine forcibly displaced people's rights to education in national laws and policy; include displaced children and youth in national education systems; enable accelerated and flexible education options to meet diverse needs; and ensure an adequate supply of trained and motivated teachers. 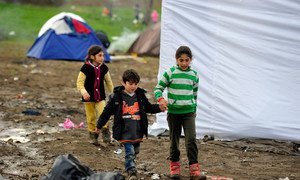 New data reveal that a record 96,500 unaccompanied refugee and migrant children applied for asylum across Europe in 2015, the United Nations Children’s Fund (UNICEF) said today, calling for urgent measures to protect these children from the serious risks of abuse, exploitation and trafficking.