UNICEF/UN018992/George
In South Sudan, Chubat (right), 12, sits with her friend in the burned ruins of her UNICEF supported primary school in Malakal Protection of Civilian site, which was burnt down in fighting on 17-18 February 2016.
19 May 2016

An average of four schools or hospitals are attacked or occupied by armed forces and groups every day, according to analysis released today by the United Nations Children’s Fund (UNICEF) ahead of the World Humanitarian Summit.

The findings, drawn from the most recent annual report of the Special Representative of the Secretary-General for Children and Armed Conflict, come in the wake of recent attacks on education and health facilities and workers – including the bombing of schools in Yemen, and a strike on a hospital in Aleppo, Syria on 27 April, that killed at least 50 people, including one of the last paediatricians in the area.

“Children are being killed, wounded, and permanently disabled in the very places where they should be protected and feel safe,” said Afshan Khan, UNICEF’s Director of Emergency Programmes, in a press release.

“Attacks against schools and hospitals during conflict are an alarming, and disgraceful, trend. Intentional and direct strikes on these facilities, and on health workers and teachers, can be war crimes. Governments and other actors need to urgently protect schools and hospitals by upholding the provisions of international humanitarian law and international human rights law, and States must sign the Safe Schools Declaration,” she added.

UNICEF underscored that attacks against schools and hospitals are one of the six grave violations against children identified and addressed by the Security Council. The last report of the Special Representative for Children and Armed Conflict documented more than 1,500 incidents of attacks on, or military use of, schools and hospitals in 2014, the agency stressed.

In Yemen, 92 schools were used for military purposes by armed forces and groups, and in South Sudan, there were seven incidents of attacks on schools and 60 involving military use.

A total of 543 educational facilities were damaged or destroyed in the State of Palestine and three attacks were documented on Israeli schools. According to education authorities in Northeast Nigeria, a total of 338 schools were destroyed and damaged between 2012 and 2014.

UNICEF also said that over the past year, the UN monitoring system has also documented so-called “double-tap,” or even “triple-tap” – strikes on health-care facilities in which civilians, as well as the first responders arriving on the scene, are attacked.

Beyond attacks on buildings, conflict has other far-reaching consequences on children’s education and health care, UNICEF underscored. In Syria, for example, as well as attacks on hospitals, the removal of medical kits and surgical supplies from aid convoys, restrictions on medical evacuations, and killing of medical personnel mean that access to critical and life-saving health care for civilians in affected areas is diminishing day by day.

“Children are being abducted from their schools in horrific circumstances in countries like Nigeria and South Sudan, while others are being raped, or recruited and used as child soldiers,” said Ms. Khan.

♦ Receive daily updates directly in your inbox - Subscribe here to a topic.
♦ Download the UN News app for your iOS or Android devices.
school|the

Empower teachers; give them the freedom to teach, UN urges on World Day 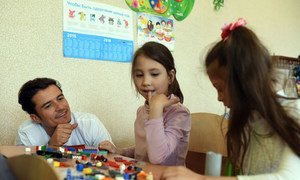