International Day against Homophobia and Transphobia focuses on health, well-being of LGBTI people

Marking the International Day against Homophobia, Transphobia and Biphobia, the United Nations today called on the global community to take action to ensure that all people have an equal right to live healthy lives free from violence, persecution, stigma, and discrimination.

The International Day was created by grass roots movements in 2004 as a moment to draw the attention of policymakers, opinion leaders, social movements, the public and the media to the violence and discrimination experienced lesbian, gay, bisexual, transgender, and intersex (LGBTI) people internationally. It is celebrated in many countries and, as in previous years, many UN agencies and UN country offices will be taking part in events to mark the Day.

This year’s focus is on raising awareness of the mental health and well-being LGBTI people. According to the UN, the lifetime prevalence of suicide attempts in gay or bisexual males is about four times that of comparable heterosexual males.

“Research has shown conclusively that LGBT individuals show higher than expected rates of psychiatric disorders, but once their rights and equality are recognized these rates begin to drop,” said the Administrator of the UN Development Programme, Helen Clark.

“There is growing recognition worldwide that same-sex sexual orientation and diverse gender identity and expression are not mental or physical disorders. Yet, many millions of LGBTI individuals around the world continue to face widespread stigma and discrimination, and many suffer violence and oppression,” she warned. “This is cause for action. We can and we must do more.”

Recalling that on this day 26 years ago on this date the World Health Organization (WHO) declassified homosexuality as a mental disorder – ending the myth that being gay is a disorder or something that requires a ‘cure’ – the Joint UN Programme on HIV/AIDS (UNAIDS) underlined that many LGBTI people continue to face enormous daily challenges, sometimes living in fear, in isolation and out of reach of life-saving health services.

“It is unacceptable that LGBTI people face violence and discrimination just because of who they are and who they love,” said UNAIDS Executive Director Michel Sidibé. “They are our sons and daughters, our brothers and sisters, our friends and colleagues. LGBTI rights are human rights. We must challenge prejudice wherever we are.”

Also today, The UN Free and Equal campaign has launched a new weapon in its continued fight against discrimination of LGBT people. The new film is called ‘Why we fight’ and it features LGBT rights activists from across the world holding up signs stating why they have joined the fight against discrimination. The film has been released to help celebrate the International Day against Homophobia & Transphobia on 17 May 2016.

Charles Radcliffe, chief of Global Issues and Intergovernmental Affairs for the UN Human Rights Office, said the video captures some of the strength and spirit that LGBT activists and allies bring to their work, and the sheer diversity of causes that help make up the movement globally. It is also a reminder to activists that they are not alone.

“The UN stands with you, (and) millions of people around the world support you,” he said.

Meanwhile, Research undertaken by the International Labour Organization (ILO) and other agencies indicates that the vast majority of LGBTI workers keep their sexual orientation a secret, often resulting in considerable stress, depression and loss of productivity.

However, ILO found that people who have come out at work have fewer symptoms of anxiety, depression and burnout, and a central factor in the decision to come out at work is a supportive environment with proactive diversity and inclusion policies in place.

Meanwhile, a group of UN and international human rights experts called for an urgent end to the pathologization of LGBTI adults and children.

They noted that “branding LGBTI people as ill” is linked to sexual violence, including so-called “corrective” rape against lesbian, bisexual and trans women, as well as transphobic and homophobic violence and bullying faced by young people on the basis of their actual or perceived gender identity and sexual orientation.

“Being lesbian, gay, bisexual and trans is part of the rich diversity of human nature,” the expert stressed, noting their deep concerned that transgender children and adults continue to be pathologized based on international and national medical classifications.

“These classifications should be reformed to depathologize transgender identities and expressions and same-sex attraction. States should adopt measures to prevent, investigate and prosecute all forms of forced, coercive and otherwise involuntary treatments and procedures on LGBT persons,” they insisted.

To mark the International Day, the UN Educational, Scientific and Cultural Organization (UNESCO) is bringing education ministers together for an event called the ‘#OutInTheOpen International Ministerial Meeting: Education Sector Responses to Violence based on Sexual Orientation or Gender Identity/Expression.’

The Ministerial meeting coincides with UNESCO’s launch of the first-ever global synthesis of data on violence based on sexual orientation and gender identity or expression in educational settings, and existing responses by education sectors across regions. While data are not available for all countries, the report shows that in some, 85 per cent of LGBT students experience homophobic and transphobic violence in school, 45 per cent of transgender students drop out.

Homophobic violence also targets 33 per cent of students who are wrongly perceived to be LGBT because they do not appear to conform to gender norms, according to the report ‘Out In The Open.’

“In 2015, at the United Nations Sustainable Development Summit, world leaders made a promise to deliver inclusive, equitable and quality education for all, and ensure healthy lives and promote well-being for all by 2030,” recalled Irina Bokova, Director General of UNESCO.

“UNESCO recognizes however, that no country can achieve this goal while students are being discriminated against or experience violence, including bullying, because of their actual or perceived sexual orientation or gender identity,” she added.

Indeed, she said that action to end discrimination and exclusion on the basis of sexual orientation and gender identity is therefore a natural aspect of planning to implement the Agenda, “as homophobia and transphobia remain deeply rooted resulting in violence and exclusion from social services and decision-making.” 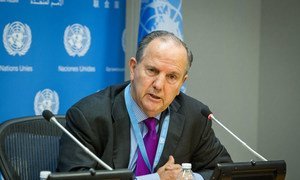 Lesbian, gay, bisexual and transgender (LGBT) detainees suffer more acts of violence than the general population in custody, according to a new United Nations human rights report that explored the link between gender and torture.