OCHA
Humanitarian aid being unloaded in East Ghouta, Syria.
12 May 2016

The first 10 days of May have been “disappointing” for aid work in Syria as the breakdown of a truce made aid deliveries dangerous and difficult to plan, the United Nations-appointed humanitarian adviser said today, as aid agencies announced that Syrian authorities had turned away a convoy to the long-besieged town of Daraya.

The first 10 days of May have been “disappointing” for aid work in Syria as the breakdown of a truce made aid deliveries dangerous and difficult to plan, the United Nations-appointed humanitarian adviser said today,as aid agencies announced that Syrian authorities had turned away a convoy to the long-besieged town of Daraya.

“The breakdown of the cessation of hostilities was a catastrophe for humanitarian work,” Jan Egeland, Special Advisor to the UN Special Envoy for Syria Staffan de Mistura, told reporters in Geneva, where the intra-Syrian talks, comprising political and humanitarian task forces, had been under way.

Mr. Egeland said that March had been a good month that had seen “very few people displaced and very few relief workers attacked and bombed.” April, however, had been “terrible,” with colleagues killed in many places and medical workers hardest-hit. Of late, the situation has varied from place to place, changing constantly. “It is very, very difficult for us to plan anything for the coming days,” he said.

Humanitarian convoys have permissions to reach only less than half of the 905,000 people they hoped to serve this month. There has not been a greenlight to go to all of the locations in Aleppo, where people are bleeding and are in great need.

The good news is that today, the first humanitarian assessment mission on its way to Daraya, which is probably the place in Syria where the greatest unmet needs exist, he said.

Similar assessment missions or assistance missions are planned in the coming days to all of the remaining besieged areas yet to be reached, including Duma, Erbin, Zamalka and Zabadin, “In the next 10-day period, all of these could be covered,” he said.

However, later in the day, the UN announced that the joint aid convoy of the International Committee of the Red Cross (ICRC), Syrian Arab Red Crescent (SARC) and the UN was refused entry to Daraya, at the last Government checkpoint despite having obtained prior clearance by all parties that it could proceed.

“Daraya has been the site of relentless fighting for more than three and a half years, and we know the situation there is desperate,” said Yacoub El Hillo, UN Resident and Humanitarian Coordinator in Syria.

“Civilians trapped here are in need of humanitarian aid. We were hoping that today’s delivery of life saving assistance would have been a first step and lead to more aid being allowed in. The UN continues to call for all parties to lift sieges on civilians in Syria," he underscored.

The convoy was due to provide essential medical supplies to the town’s health facility, distribute nutrition items for children and lead a vaccination campaign for children under 12, as well as distribute hygiene materials. This would have been the first ever joint convoy aid delivery to the town, which has been under siege since November 2012.

“Communities in Daraya are in need of everything, and it’s tragic that even the basics we were bringing today are being delayed unnecessarily. We must be able to provide aid impartially and safely,” said Marianne Gasser, Head of the ICRC in Syria.

“There must be minimum conditions for independent humanitarian action in Syria. Today those conditions were not met. We urge the responsible parties to grant us this access immediately,” she added.

Speaking ahead of his advisor, Mr. de Mistura explained that the cessation of hostilities will be among the main subjects of the next International Syria Support Group (ISSG) meeting to be held in Vienna. The ISSG, which along with Russia and the US, comprises the UN, the Arab League, the European Union and 16 countries, has been seeking a path forward to end the Syrian crisis for the past several months. 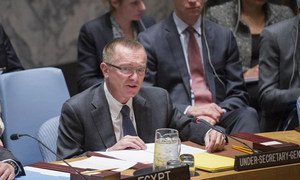 No corner of Aleppo is being spared, Security Council told, as UN officials urge end to ‘carnage’ in Syria

The cessation of hostilities in Syria Must be put back on track, the United Nations political chief today told the Security Council, as the UN Emergency Relief Coordinator said “there can be no explanation or excuse” for waging war on civilians, in Aleppo or anywhere else in the crisis-riven country.