‘El Niño is not a one-off event,’ UN says, calling for action to address phenomenon’s impacts

The international community must boost efforts to build the capacity for disaster risk management and readiness to prevent El Niño weather extremes from causing humanitarian crises in affected countries and impeding their development, the President of the United Nations Economic and Social Council (ECOSOC) said today.

“We must remember that El Niño is not a one-off event but recurring global phenomena that we must address for future generations and to achieve the Sustainable Development Goals (SDGs),” said ECOSOC President Oh Joon at the opening of a special meeting on Impacts of the 2015/16 El Niño phenomenon: Reducing risks and capturing opportunities at UN Headquarters in New York.

“All partners, the United Nations, international and regional organizations, civil society, the private sector and the scientific community, need to take coordinated and fortified action to tackle El Niño risks,” he added.

Mr. Oh underscored that since 2015, the world has witnessed the largest El Niño occurrence to date, with many developing countries in Latin America, Africa, Asia and the Pacific suffering under its “devastating and far-reaching impacts”.

“Extreme weather conditions have become more frequent with climate change, bringing droughts, fire, destruction of agricultural production, poor health and diseases, and displacement of people all over the world. These conditions also affect commodity prices and the prospects for sustainable development,” he stressed.

Noting that El Niño is a good example of climate change affecting the livelihood of people, the ECOSOC President said that Marshall Islands, the Federated States of Micronesia and Palau have all declared states of emergency due to drought conditions from El Niño, while Malawi has declared “a state of disaster.”

According to the UN Children’s Fund (UNICEF), as of February 2016, almost one million children needed treatment for acute malnutrition in Eastern and Southern Africa from food shortages due to El Niño weather extremes.

Mr. Oh noted that the meeting – which was convened at the request of the UN General Assembly – would provide insights into the health, socio-economic and environmental dimensions of El Niño and share effective steps taken to reduce its impact, with a particular focus on what can be done to mitigate risks, losses and suffering related to such events in the future.

Also speaking at the special meeting was Elena Manaenkova, Assistant Secretary-General of the World Meteorological Organization (WMO), who highlighted that while the scientific understanding of El Niño has increased greatly in recent years, the current 2015/16 unprecedented El Niño and future events are entering “uncharted territories.”

“Our planet has altered dramatically because of climate change, the general trend towards a warmer global ocean, the loss of Arctic sea ice and of over a million square kilometres of summer snow cover in the northern hemisphere. This naturally occurring El Niño event and human induced climate change may interact and modify each other in ways, which we have never before experienced,” she said.

Ms. Manaenkova noted that, for its part, the WMO Strategic Plan 2016-2019 sets the directions and priorities to guide the activities of members and all WMO constituent bodies to enable all members to “improve their core information, products and services, maintain necessary infrastructure, and to directly benefit from advancements in science and technology.”

Noting that climate services as well as disaster risk reduction and capacity development are among the WMO’s top strategic priorities, she called on government and development partners to support and invest resources in the National Meteorological and Hydrological Services, especially in least developed countries and small island development States, to enhance and sustain their contribution to climate- and disaster-resilient sustainable development.

Along those lines, Robert Glasser, Special Representative of the Secretary-General for Disaster Risk Reduction, noted that although it is too early to assess the full impacts of the current El Niño, it is certain that countries have greater economic exposure to El Niño-related events, while the proportional impact on people and their livelihoods is higher in low-income countries and small island developing States.

Mr. Glasser underscored that as a result of more accurate seasonal forecasts, there is an increased predictability of occurrence of El Niño cycles and occurrence of extreme events in general.

“With this in mind, countries have better opportunities to take action to manage and reduce the related risks and impacts,” he stressed.

He also highlighted that the current El Niño has manifested in extreme weather events that have had an impact on a number of countries across the world and affected an estimated 60 million people so far. Some countries have experienced greater precipitation leading to floods, while others have experienced severe droughts affecting crop yields, and livestock production leading to food and water shortages.

To reduce the impacts of El Niño, it is necessary to translate seasonal forecasts and risk data into risk-informed decision-making and actionable guidance so that different development sectors can take proactive measures, Mr. Glasser emphasized.

“If development sectors get these forecasts early enough, action can be taken to reduce the impact of El Niño,” he said.

He also noted that preventing new and reducing existing disaster risk is the core goal of the Sendai Framework for Disaster Risk Reduction 2015-2030 adopted by the international community this past year.

“Together with the 2030 Agenda for Sustainable Development, and the Paris Agreement on climate change, the Sendai Framework provides a way forward for addressing future El Niño events,” he said.

The ECOSOC special meeting was organized by the UN Department of Economic and Social Affairs (DESA) in collaboration with the UN Office for Disaster Risk Reduction (UNISDR) and WMO. 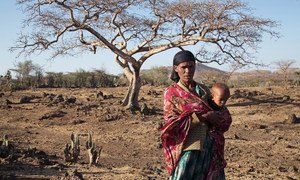