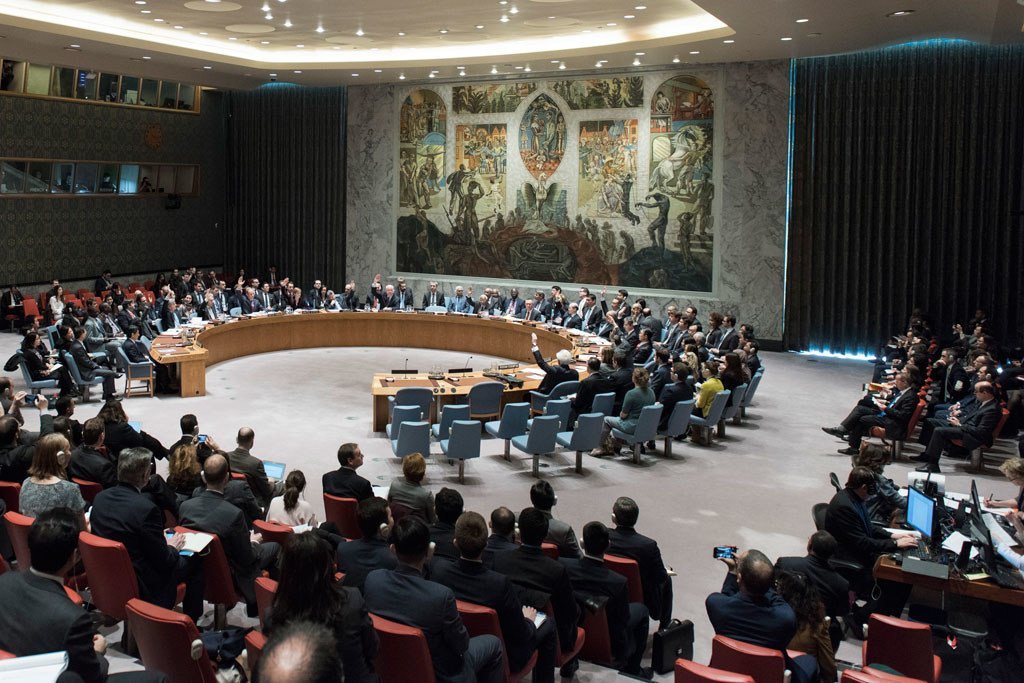 UN Photo/Mark Garten
The Security Council unanimously adopts a resolution imposing additional sanctions on the Democratic People’s Republic of Korea (DPRK) in response to that country’s continued pursuit of a nuclear weapons and ballistic missile programme.
4 May 2016
Peace and Security

Counter-terrorism and non-proliferation are on the agenda today at the Security Council, where at least seven sanctions committees will brief the main United Nations body responsible for maintaining international peace and security. We’ve prepared a quick snapshot covering the basics of UN sanctions and how Sanctions Committees work.

Using the ‘threat’ of sanctions

A sanction’s life-cycle often starts with the Security Council taking up a situation of concern. The Council or the UN Secretary-General and his representatives will usually employ peaceful means to prevent the escalation, or outbreak of, conflict.

At this stage, even the hint of Security Council sanctions may be enough to encourage conflict parties to enter into dialogue. This is sometimes what the Council means when it signals that it will “consider all measures at the Council’s disposal, including the use of enforcement measures.”

Sanctions are meant to be a last resort when it comes to addressing massive human rights violations, curbing illegal smuggling or stopping extremism groups. Increasingly, sanctions are also being used to support peace efforts, to ensure that elections are held, or to demobilize armed groups.

This ability stems from the UN Charter. Under Article 41 of Chapter VII, the Council can use enforcement measures not including weapons, such as “complete or partial interruption of economic relations and of rail, sea, air, postal, telegraphic, radio, and other means of communication, and the severance of diplomatic relations.”

The first sanctions regime (or set of measures) was imposed in 1966 on Southern Rhodesia, today known as Zimbabwe.

Imposing sanctions – the what, who and how

Sometimes the threat of sanctions does not work, and it is up to the Security Council to decide to impose sanctions on individuals, entities or States who bear responsibility for conflict.

At this stage, the Security Council adopts a resolution establishing a new sanctions regime, where it determines the precise sanctions measure – such as arms embargoes, assets freezes or travel bans, for example – that it is imposing on the situation.

In some cases, the Council decides to also identify the individuals or entities that are subject to these ‘targeted’ sanctions measures. In other cases, the relevant Sanctions Committee, established as part of a sanctions resolution, will do so.

The individuals or entities sanctioned can change – with new names being added or removed from the list.

Sanctions Committees are subsidiary organs of the Council and are composed of all 15 of the Council’s members. Their role is to implement, monitor and provide recommendations to the Council on particular sanctions regimes. They meet regularly to consider reports from expert panels and to hold meetings with Member States, UN actors and international organizations.

In some cases, an expert panel is created to assist the sanctions committee. An expert panel monitors the implementation of the sanctions measures and reports its findings to the committee, or in some cases directly to the Council. Expert panels are usually comprised of between five to eight technical experts, all of whom are appointed by the Secretary-General. Expertise in these panels depends on the sanctions imposed, but may include arms, natural resources or human rights/humanitarian experts.

Of central concern to the Council is that sanctions are implemented with due regard for human rights.

De-listing requests from the other sanctions committee are managed by the Focal Point for De-Listing. The post of Focal Point, which was established by resolution 1730 (2006), is based in the UN Department of Political Affairs.

The Security Council can remove UN sanctions once a conflict situation improves. UN sanctions have been lifted in different ways. In some cases, benchmarks contained in sanctions resolutions have been achieved; in others, peace processes have achieved the desired outcome.

♦ Receive daily updates directly in your inbox - Subscribe here to a topic.
♦ Download the UN News app for your iOS or Android devices.
sanctions