Ecuador: UN agency to scale up emergency operation to reach 260,000 in earthquake zone

The United Nations World Food Programme (WFP) announced today the start of an emergency operation to assist 260,000 vulnerable and food insecure people seriously affected by the earthquake in Ecuador and in desperate need of food and other basic necessities.

“Due to the earthquake a significant number of people no longer have access to their regular sources of income and food, and this will impact negatively their food security,” said WFP Regional Director for Latin America and the Caribbean, Miguel Barreto, who is in Ecuador to coordinate the agency’s emergency response with WFP’s Director of Emergencies, Stefano Porretti.

The earthquake, the worst in Ecuador’s history, has reportedly left more than 600 people dead and over 12,000 injured mostly in coastal areas. According to estimates by Government and international agencies, 520,000 Ecuadorians were directly affected by the disaster and require food assistance. The first WFP food supplies reached the stricken area only three days after the earthquake but now the scale of the impact is becoming clearer.

Following a government request, a convoy with WFP emergency food kits reached the city of Portoviejo in Manabí province on 19 April. WFP staff supported distribution of food to the most affected families and hospitals in Manabí, reaching some 50,000 people to date.

Last Thursday, the UN Humanitarian Response Depot (UNHRD), managed by WFP, airlifted 40 metric tons of emergency supplies from its base in Panama – including water and sanitation equipment, hygiene and kitchen kits and mobile storage units – to support the humanitarian assistance effort in Ecuador. This is part of a WFP Special Operation to support logistics capacities in response to the earthquake. A $2 million operation has also just been launched.

“WFP plans to scale up to assist a quarter of a million people affected by this disaster, in close coordination with the Government,” said Mr. Barreto, after visiting the devastated city of Pedernales with Ecuador’s Minister of Foreign Affairs, Guillaume Long, and the Organization of American States (OAS) Secretary General, Luis Almagro.

“Based on the results of upcoming field assessments, WFP will adapt its plans in coordination with the authorities who are leading this effort, and support the overall government capacity to respond,” he added.

Meanwhile, WFP Representative in Ecuador Kyungnan Park said the number of institutions and individuals who are joining efforts to provide humanitarian assistance on the Ecuadorian coast is “amazing.”

WFP recalled that it relies entirely on voluntary funding from governments, companies and private individuals. The cost of the three month operation designed to support the overall Government response to the earthquake is $34 million. 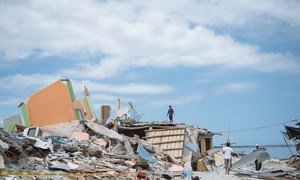 The Government of Ecuador and the United Nations today launched an urgent $72.7 million appeal to respond to the 7.8 magnitude earthquake that struck coastal provinces of north-west of the country less than a week ago, aiming to kick-start life-saving assistance, protection services and early recovery support to assist approximately 350,000 people over the next three months.