With Côte d'Ivoire now firmly anchored on the path of peace, stability and economic recovery, the top United Nations peacekeeping official today said that it is perhaps time to consider wrapping up the UN mission and begin to consider the Organization’s future role in supporting the consolidating the country’s gains.

“Côte d’Ivoire is on the right track […] it would be prudent, therefore, to draw down our collective involvement through the peacekeeping mission in the country,” Under-Secretary-General for Peacekeeping Operations Hervé Ladsous told the Security Council this afternoon, particularly welcoming the Government’s ongoing reforms to the expansion of the political space and strengthening of unity and national cohesion.

Meanwhile, he added, discussions are underway for the holding of a constitutional referendum planned by the end of the year, the adoption of a new Constitution that will better reflect developments the socio-political context of Côte d'Ivoire over the past decade.

Despite a largely stable security situation, Mr. Ladsous noted, however, that there are "weaknesses" including intra-community conflicts in some regions of the country, as well as military threats in the southeast.

"The country is subjected to areas of tension in the region Boukani in the northeast, as evidenced during violent clashes in the night of Wednesday to Thursday, 24 March, between pastoralists and farmers in Bouna” he recalled, adding that the clash left at least 30 dead and displaced more than 2,000 people, mainly women, children and elderly.

Since the terrorist attacks of 13 March in Grand Bassam, claimed by al-Mourabitoun group affiliated with Al-Qaeda in the Islamic Maghreb (AQIM), the Government has taken proactive measures to identify and bring to justice those responsible attacks further noted Mr. Ladsous, hailing the subsequent efforts throughout the subregion towards cooperation in the fight against terrorism and violent extremism.

In view of these and other efforts, he said, it "would be appropriate, in my opinion, to conclude the phase of our collective commitment through the peacekeeping mission in the country.”

While welcoming the Security Council's willingness “in the near future” to determine that the situation in Côte d'Ivoire is no longer a threat to regional peace and security, Mr. Ladsous urged the body to define the future role of the UN in the country to support the consolidation of peace, stability and democracy. 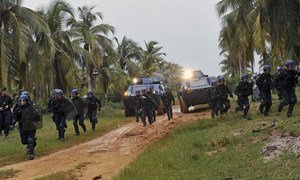 The United Nations Security Council has strongly condemned yesterday’s terrorist attacks in Grand-Bassam, Côte d’Ivoire, that killed at least 16 people and left many more injured, and for which Al-Qaida in the Islamic Maghreb has claimed responsibility.