The United Nations Assistance Mission for Iraq (UNAMI) said it is receiving reports that humanitarian conditions are worsening and human suffering is increasing in the city of Fallujah, which has been under control of the Islamic State in Iraq and the Levant (ISIL/Da’esh) for more than two years.

With the siege of Fallujah tightening, supplies are not reaching civilians, and there are “credible reports from key informants” that people wanting to leave the city and seek safety are unable to do so, UNAMI said in a press release.

“We are profoundly worried about Fallujah. There are reports of widespread food shortages and lack of medicines,” Lise Grande, the UN Humanitarian Coordinator for Iraq, said over the weekend.

“We don’t have access to the city, but we have to assume based on what we are hearing that people are in terrible trouble,” she added.

Describing Fallujah as “an active conflict zone,” Ms. Grande said UNAMI has received reports that ISIL has killed civilians attempting to leave and controls potential escape routes. The Mission has also received reports that the little food and medicines available have been used for ISIL fighters.

“With so much at stake, all parties to the conflict have to do everything possible to protect civilians and respect their right to receive life-saving humanitarian support,” said Ms. Grande.

UNAMI said that humanitarian partners continue to engage with civil and military authorities to find the best ways to reach civilians in areas under siege.

“We are ready to respond to help people in need. We are scaling up, pre-positioning stocks and expanding our assistance in the sites where displaced people may go,” Ms. Grande said.

“Hundreds of thousands of civilians remain trapped and under siege in Iraq. People trying to flee conflict areas in search of safety are often held up or prevented from moving. This is wrong - civilians have the right to protection and help,” she stressed.

The UN estimates that 10 million people in Iraq need some form of humanitarian assistance, including 3.4 million people who have been displaced since January 2014. An estimated 3 million people are living under ISIL control, while more than 540,000 have returned to their homes. 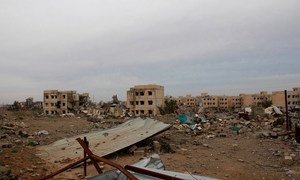 The top United Nations official in Iraq has expressed concern over the continuing acts of violence in the country, which last month took 1,119 lives and injured another 1,561 – according to casualty figures recorded by the UN Assistance Mission for Iraq (UNAMI).