Addressing the opening of the 2016 session of the Commission on Population and Development, United Nations Secretary-General Ban Ki-moon today underscored the importance of that body's role in advancing the new global development agenda.

“This Commission has a proud tradition of focusing on people,” he said, stressing that the body addresses issues related to the timeless opening words of the UN Charter: 'We the Peoples.'

Above all, people are at the heart of the 2030 Agenda for Sustainable Development, he said of the 15-year vision unanimously adopted last year by UN Member States.

Mr. Ban highlighted the importance of understanding demographic trends, a pillar of the Commission's work, in achieving the Sustainable Development Goals (SDGs).

When people are not counted, they are excluded

“We all understand that people can never be reduced to mere numbers,” he said. “At the same time, statistics are essential for tracking progress. When people are not counted, they are excluded. To live up to the commitment to 'leave no one behind,' we have to make sure everyone is counted.”

Governments will have to gather census data and use it to understand demographic change because that will help them develop effective plans, he said.

“When I was born, my parents didn't record the date of my birth,” Mr. Ban said, noting that families were understandably worried that babies would not survive, and waited until they were sure that their babies were able to survive.

That's why his and his wife's passport dates of birth are actually different from their real ones, he said, expressing concern that in some countries, that kind of practice still persists. He urged all countries to have archives of these records and guarantee the rights of citizenship and identity to all.

Data is also critical to providing optimal public health services and to ending inequalities, he added.

Many countries have empowered women and men to make their own decisions about the timing and spacing of their children. Where this leads to lower birth rates, countries can benefit from a demographic dividend by providing education and other opportunities, especially for youth, he said.

In some countries, very low fertility levels are causing population decline. Rural areas are being de-populated, and losing their economic vitality. In other countries, where reproductive health care is lacking, fertility rates remain high. These countries struggle to match the pace of population growth with an expansion of economic output, infrastructure and services.

Elsewhere, countries struggle to provide health care and pensions, with their workforce ageing and the number of retirees increasing. Some governments have responded by raising the retirement age and expanding opportunities for older persons to have an active life.

The world now has the largest generation of young people in history, and to unleash their potential, there is a need to invest more in education, opportunities and services for youth, he said.

“The United Nations is proud to support efforts to put all people at the heart of development. This is the spirit of the 2030 Agenda,” he said.

He, however, warned that “one of the most dramatic population trends of our times is mass displacement, noting that the numbers are astronomical with some 60 million people displaced either within countries or internationally, and thousands of desperate migrants dying on dangerous journeys.

The World Humanitarian Summit next month in Istanbul will bring leaders together to agree on a core set of actions that will chart a course for real progress, and then on September 19th, just one day before the general debate, the General Assembly will hold a high-level meeting to address the challenges of large population movements, he said.

Mwaba Patricia Kasese-Bota, Commission Chair, said 2016 was a crucial year as the UN was being reshaped to deliver on its promise of assisting Member States in implementing the 2030 Agenda.

At the same time, the Commission continued with its mandate to support the implementation of the Programme of Action of International Conference on Population and Development that was adopted in Cairo in 1994.

As both agendas placed a strong emphasis on the importance of data, the Commission's session would focus on the demographic evidence base, which was built on a foundation of data, she said.

The availability of reliable and timely demographic data was essential for planning and implementing interventions to achieve the Sustainable Development Goals and to monitor progress towards their achievement. The 2030 Agenda was of the people, by the people and for the people, she said. 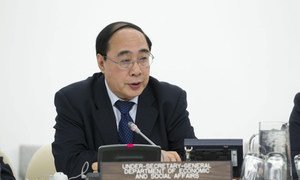 As United Nations Member States met today in New York to begin the 48th session of the Commission on Population and Development, the head of the UN office dealing with economic and social affairs underlined the importance of the link between population changes and the Organization’s current development priorities.