The deliberate infliction of torture on children is an “unbearable reality” in many conflicts and human rights crises around the world, but the international community must continue to demonstrate its commitment to holding the perpetrators of such acts accountable as well as assist the recovery of affected children, the United Nations human rights chief said today.

Speaking in Geneva at the 43rd session of the Board of Trustees of Trustees of the UN Voluntary Fund for Victims of Torture, UN High Commissioner for Human Rights Zeid Ra’ad Al Hussein noted that the Fund’s work over the past three decades shows the “extraordinary capacity” for resilience of child victims of torture, who are often targeted to extract information, pressure their parents, or simply as punishment for supposed misbehaviour.

“Neither national security nor the fight against terrorism, the threat of armed conflict, or any public emergency can justify torturing anyone,” Mr. Zeid stressed. “And yet many States and non-State actors continue to torture people – a horror that my staff must combat daily.”

States have an obligation to help child victims of torture work towards recovery and find redress, the UN human rights chief emphasized, although he expressed regret that this obligation is often ignored. But he noted that around the world, networks of physicians, psychologists, social workers and lawyers do assist child survivors of torture to deal with the trauma they have suffered.

Much of their work is supported by the UN Voluntary Fund for the Victims of Torture, which marks its thirty-fifth anniversary this year, and which Mr. Zeid’s Office manages.

Today, the Fund launched a new booklet, From Horror to Healing, with personal accounts from victims of torture, and the practitioners who help them heal and reclaim their lives and rights. The testimonies were collected from organizations and rehabilitation centres supported by the Fund, which provide direct assistance to about 50,000 victims of torture and their family members every year.

Mr. Zeid noted that these rehabilitation efforts also focus on refugee and migrant children. Many of them have endured severe trauma and ill-treatment before leaving their homes – in some cases, already amounting to torture. In addition, children caught up in large-scale migration movements are also at high risk of violence during their journeys, including sexual violence at the hands of traffickers and criminal gangs.

A “shockingly” high number of child migrants suffer detention at borders, and may suffer very harsh physical abuse in detention by agents of the State, the UN human rights chief said. It is absolutely vital that States attentively protect the rights of all migrants and, most especially, all child migrants, he stressed.

“These children must know that they are uniquely precious in the eyes of the world; that they have rights; and that what has been done to them is illegal and wrong,” Mr. Zeid said. “We must demonstrate that we are committed to tracking down the perpetrators and holding them to account. And we must do what we can to help them develop the resilience and wisdom to free themselves from the physical and emotional pain they have endured.”

In customary law, under the UN Convention against Torture and Other Cruel, Inhuman or Degrading Treatment or Punishment and the Convention on the Rights of the Child , torture is prohibited in all circumstances, without exception, and children are entitled to specific protection, because of their heightened vulnerability.

Yet, the UN human rights chief said that as documented by the work of the UN Fund and other UN mechanisms, children are often targeted because they are children, as a way of intimidating entire communities, or to leverage additional pain onto their parents.

“The torture of children is an unbearable reality, particularly in countries in conflicts such as Syria, where the Commission of Inquiry has repeatedly excoriated the torture of children,” Mr. Zeid said. “Even very young children are spared no suffering – including the use of specific machinery to inflict pain; mock executions; the obligation to witness pain being inflicted on other children or family members; and sexual mutilation and assault.”

Emphasizing that it is more unbearable to work on a daily basis with children who have been tortured, Mr. Zeid said that is vital to assist them to recover, particularly because torture inflicts massive physical and emotional damage on the developing bodies and minds of children and adolescents.

“In addition to its sometimes very significant physical and cognitive impact, the experience of such profound helplessness may fundamentally impair the child’s ability to trust, to freely develop her or his personality and skills, and to navigate changing circumstances with confidence,” he said. 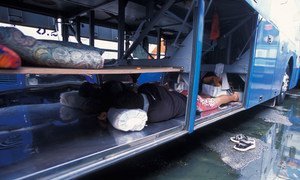 The Security Council today called on all United Nations Member States to do everything in their power to combat human trafficking, especially for sexual purposes, citing the Islamic State of Iraq and the Levant (ISIL), the Lord's Resistance Army (LRA) and Boko Haram as prime perpetrators.